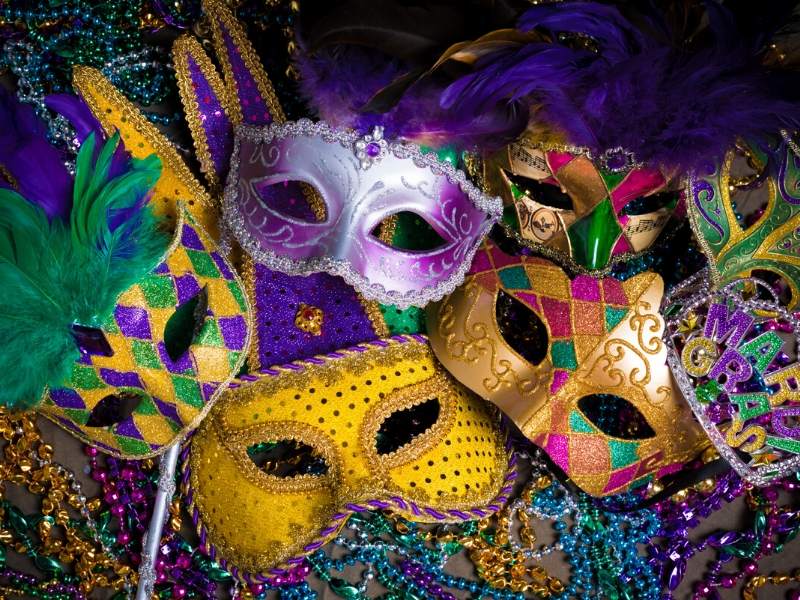 You might think New Orleans is the place that started Mardi Gras, and if so, you’d be wrong. New Orleans may be the best-known place where it’s celebrated but it’s not the originator. Believe it or not, it was actually started in Mobile, Alabama! Frenchman Nicholas Langlois established Mardi Gras in 1703, fifteen years before New Orleans was founded. I had no idea and found this and the history to be fascinating. (#historynerd)

Mardi Gras Mobile is now known for its huge, multi-week celebrations with parades and floats. It spans cultures, religions, and races and it’s celebrated by all in the Mobile area. Read this to learn more about the origins of Mardi Gras and what it’s like today in Mobile.

Some links in this article may be affiliate links, which means that if you purchase through them, we receive a small commission. This will never cost you extra, and appreciate your support!

What is Mardi Gras?

Mardi Gras refers to the Carnival celebration in the United States. Carnival is celebrated in many areas of the world including Europe, South, Central, and North America, and the Caribbean. The areas that celebrate carnival (or Mardi Gras) are predominantly French ethnic in history and culture.

Festivities begin on or after the Christian feasts of Three Kings Day (also called Epiphany) and end the day before Ash Wednesday (also called Shrove Tuesday). Mardi Gras is actually French for “Fat Tuesday,” and is sometimes called by that name as well. It represents the last night of eating rich foods before the ritual fasting of Lent. This is when people repent for their sins in various ways including sacrificing some pleasures (like certain foods and other things). Interesting origins for the big party is has become known for!

To people from Mobile, Mardi Gras isn’t just a date but an entire season. And it goes so far beyond that as well. It harkens back hundreds of years to secret and exclusive societies that are deeply woven into the local culture. There are many mystic societies, some date back to 1704 though new societies have been formed since.

Each mystic society has its own rules. Some are never seen in public parades but hold invitation-only events for their secret members. Their private balls begin in November where masked men wear white tie and tails and women wear full-length evening gowns. Some mystic societies treat the balls as an extension of the debutante season of their exclusive social circles.

Some of the practice around Mardi Gras is exclusive to these societies. However, the public is welcomed to parades where many of the society members ride floats and horses throwing gifts to the public. These gifts can be plastic beads, coins, candy, stuffed animals, toys, wrapped cakes known as Moonpies other things.

Mardi Gras didn’t start off as the big party that it is today. It had much more humble origins that started as a Fench Catholic tradition (which is quite funny when you think about what it has become)!

Mardi Gras was first observed in the New World by French pioneers in the first settlement of Mobile, called Twenty-Seven Mile Bluff, in 1703. In 1711, a paper-maché bull was pulled down Dauphin Street in what was believed to have been the first carnival parade in North America. People joined in song, eating, drinking, and dancing.

This evolved to people marching with rakes, hoes, and cowbells, forming the Cowbellian Society. The Cowbellians introduced horse-drawn floats in their parade called “Heathen Gods and Goddesses.”

The Civil War and Mardi Gras

Mardi Gras was canceled during the Civil War and revived a year after by Joe Cain. The Sunday before Mardi Gras is now called “Joe Cain day” and it is the largest parade locally. If you have hard the saying, “raising Cain,” then you may be familiar with his legacy.

The first mystic society started in Mobile in 1704 was called the Societé de Saint Louise, founded by French soldiers. Groups started to form towards the late 1800s like the Order of Myths, the Infant Mystics, and the Knights of Revelry. The Order of Myths is the oldest with a float in the parade and its emblem is of Folly chasing Death around the broken pillar of life. The Knights of Revelry feature Folly dancing on the rim of a large champagne glass.

Dozens of mystic societies have been started since, some lasting and others not. Membership forms by some affiliation including gender, race, religion, co-workers, bachelors, and others. There are more than 40 now in Mobile and many are actually secret societies. It’s difficult to determine how these groups impact Mobile society though their influence is believed to be pervasive. Societies and secret societies are now an integral part of the structure of Mardi Gras and local culture.

The societies are all run in different ways. Some operate like a business collecting membership and allowing open membership. Others are restricted and have waiting lists. Some only allow certain people based on criteria like what school they graduated from and others.

I love the names of some of these societies so I wanted to share: Order of Polka Dots, Maids of Mirth, Neptune’s Daughters, Crewe of Columbus, Infant Mystics, and Cosmic Cowboys of Wragg Swamp.

The king and queen of the Mardi Gras festivities are chosen annually from the original elite families of the area, 50 in total. These families are now represented by two associations, MCA (Mobile Carnival Association) and MAGMA (Mobile Area Mardi Gras Association). Color, religion, and ethnicity don’t matter for this, however, being a member of the original families does. And of course, the King and Queen’s families pay for a lot for the privilege. This includes their wardrobe and a large donation that funds many of the festivities.

The official Mardi Gras season starts in November in Mobile when the exclusive secret mystic society parties kick-off by invitation only. This is also the time that many of the preparations begin for social debutante season for the families of the elite in Mobile. This time of year has many festivities including New Year’s Eve balls. Some mystic societies kick off their events at Twelfth Night (January 6th). Celebrations include king cake parties, parades, balls, and masquerade balls.

In the weeks right before Mardi Gras, Mobile hosts a parade daily. They grow grander and more elaborate in scale as Mardi Gras approaches. Parades are also offered in many of the neighboring towns, including Dauphin Island. The parades are mostly organized by the mystic societies or orders.

You May Also Like One Day in Dauphin Island Alabama

The traditional Mardi Gras colors in Mobile are purple and gold. Purple represents justice, though it also is related to royalty and monarchies in Europe. Gold represents power. A third color has been added, likely due to the influence of and popularity of Mardi Gras celebrations in New Orleans. Green was added, representing faith.

You will see these three colors together everywhere around Mobile during Mardi Gras season. In January, I saw a tri-colored wreath on a bus bench, and the colors decorating a tree in Dauphin’s restaurant in Mobile. They were draped around the Lighthouse Bakery on Dauphin Island, and there were what looked like Christmas decorations in purple, gold, and green in trees around the city. There are splashes of these colors everywhere.

Mardi Gras Day is always the Tuesday before Ash Wednesday, and the date will vary yearly. It generally falls between February 3rd and March 9th. It is always 47 days before the Christian holiday of Easter.

Celebrations generally start around two weeks prior to Mardi Gras day. However, like in many areas in Alabama, Mardi Gras Mobile starts well before. The parades generally do fall a couple of weeks before Mardi Gras Day. During this time, there are generally daily parades including several large ones.

There are a lot of fun things to do in Mobile. If you’d like to learn more about Mardi Gras, the Carnival Museum in Mobile is a great place to go. It is a treasure trove of great information and things to see. They have a lot on display including many dresses, outfits, and trains worn by former kings and queens, floats, costumes, pictures, and more. There is a really interesting and informative movie but if you want the best information, tour with one of the docents. They really know their stuff and it’s fascinating.

You May Also Like 9 Fun Things to do in Mobile

Mardi Gras Mobile is not just a big party but it’s a massive affair that has widespread social, cultural, political, and financial impacts on the city and the surrounding area. I encourage you to learn more and to consider visiting during Mardi Gras season to get a flavor of the excitement of Mardi Gras.