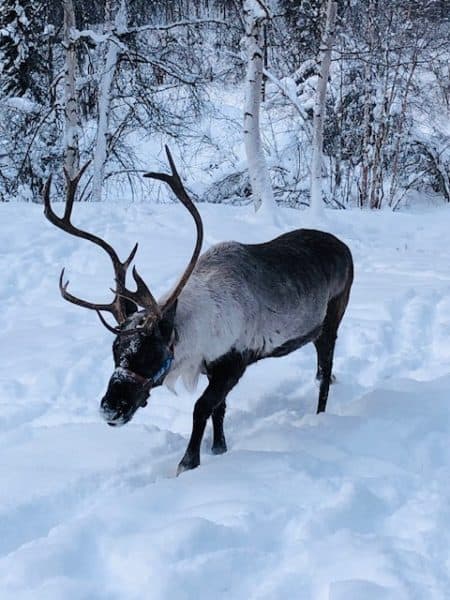 Running Reindeer Ranch is one of the best things to do in Fairbanks, and according to TripAdvisor, it ranks #2. It sprung from a childhood passion to become a thriving family-owned small business.

I’ll admit that when I booked my trip to Fairbanks to (hopefully) see the aurora and began my research, this was one of the activities that I was most excited to do. It turned out to be one of my favorite activities of the trip and one that I highly recommend.

Jane, who owns the business and led our tour, is a dynamic and interesting person, very knowledgeable about reindeer, and equally passionate about them. We got to know her herd of eight during the tour including their different personalities and quirks.

What is a Reindeer?

Anyone who has heard of Santa Claus knows about reindeer. As the song goes: “Rudolph the red-nosed reindeer had a very shiny nose…” Fewer people actually know what a reindeer is, and fewer still have seen one. And no, they don’t have red noses but they are absolutely adorable.

A reindeer is a type of deer found in the northern regions of the world. They are similar to caribou and are the same genus and species, but caribou are wilder. Caribou are migratory but reindeer prefer to stay in one location and as a result, they are very difficult to rehome.

Reindeer were domesticated livestock brought to Alaska in the late 1800s from Russia. They were brought to support the Native Americans both serving as a food source and for labor, pulling sleds and carrying gear. This project started with 16 reindeer, and through additional acquisition and breeding, the population grew to a peak of 640,000 in the 1930s. Currently, there are less than 50,000 reindeer living in Alaska.

It all started with ten-year-old Robin’s dream to get a horse. However, her mother, Jane, was allergic, so that wasn’t an option. Robin wanted livestock and asked for a goat (“nope”) or sheep (“nope, again.”) They had a series of smaller animals including rabbits, guinea pigs, chinchilla, dogs, and chickens, but Robin’s interest to own livestock remained.

Jane suggested an animal better suited to the Arctic climate, so Robin then asked for a reindeer. Jane agreed if she raised the funds for one, learned how to care for them, and committed to their care. She admitted that she figured that would be the end of it, but it wasn’t.

Robin’s two-year project began to research how to care for a reindeer. She held several fundraisers to raise money for a reindeer and for its care. She even did a school project devoted to reindeer care.

Robin talked with reindeer owners and found a vet, and continued working to raise money for them. Since reindeers must live in pairs, she had to get two reindeer. She raised the funds for one, and her father bought the second. Ruby and Moon were welcomed to the family.

That was more than eleven years ago, and now the herd has grown to eight through both acquisition and new births. Jane and her husband, Doug, both used to work full time and run tours on the side, however, Jane now works at the ranch full time.

How Running Reindeer Ranch Got Its Name

When the first two reindeer came home, Jane’s daughter spent all of her free time in the pen with them and even slept with them. When the first snowfall hit, she decided to go indoors. The reindeer got out—perhaps seeking their former home, and it was a four-day process trying to get them back!

Not a lot of people owned reindeer, so when they were spotted around town, people knew whom to call. Jane and her family would go to get them and they would run away. They did manage to get them back home and Running Reindeer Ranch was named.

The herd of eight reindeer includes Buttercup, Jasper, Rocket, Sapphire, Toby, Margarita, Olive, and Daisy. Olive and Daisy are breeding females that go to a nearby farm in September for “date night” as all of the males are fixed in the herd. It makes it safer for the people who visit the ranch as breeding time, or rutting season can be very dangerous as the males can be quite aggressive.

Sapphire and Toby are the babies. Rocket is a sweet guy who gets picked on a bit by the others and can often be seen running off. Olive and Jasper are a bit bossy and are generally the leaders of the herd.

The hierarchy for reindeer is based on the size of their antlers. The boss of the herd is the one with the largest, most impressive antlers. This will change throughout the year as their antlers naturally shed annually, then grow back.

Jane has a collection of each of her reindeer’s first antlers on display like a proud mom. They are actually covered with highly vascularized velvet (soft fur) during the summer and are very soft. Their antlers grow in only three months from May to August. They are very sensitive at this time and should not be touched.

Pregnant females keep their antlers which gives them better access to the food supply, and they drop their antlers two days to two weeks after the calf is born. An interesting fact shared is that the baby must eat within two hours or it will die.

When the reindeer don’t follow the rules for appropriate behavior around people, their antlers are cut. No antlers, no attitude. This is done when they are not sensitive so it doesn’t hurt them, but it does impact their behavior.

Rocket had his antlers cut as he was misbehaving around people, and now he gets picked on by the others. His antlers will grow back next year, and Jane hopes that he will make better decisions so he can keep his antlers.

Your Visit to Running Reindeer Ranch

It’s a nice drive on the west side of Fairbanks through a gorgeous pine forest to get to the ranch, and it’s easy to find. We arrived a few minutes early and were warmly greeted and brought inside.

They have a good amount of gear (including boots, gloves, and scarves) if what you bring isn’t warm enough. Hint: unless you live in the far north areas of the country, it won’t be!

Because they are considered livestock, the fencing is required by the government and there are periodic inspections to ensure the reindeer’s safety and compliance with the law.

The reindeer are trained but visitors are asked to support the training and to reinforce their good behavior. Before we met the reindeer, we were given some instructions.

Reindeer are really cute and generally quite sweet. These reindeer are well socialized and curious about people. It’s fun to walk among them and to get to know their personalities a bit.

Our visit was wonderful and we didn’t have any issues. Sure, it can be a little unnerving having a reindeer run at you at full throttle, but if you simply step out of their way, they go right on by. They kept us great company during our walk in the woods and we got to take lots of pictures with them and of them.

It was so much fun to spend time with this herd of reindeer and learning more about them. Especially since I really knew nothing previously. Here are some of the interesting things we learned about reindeer on the tour:

The ranch isn’t only about reindeer! There is a gorgeous and very sweet husky dog named Garnet. His job is to guard the yard and he keeps the reindeer safe. He does have a dog house where he often stays though he is allowed inside as well. Garnet did come inside with us for a bit for petting and belly rubs.

In case you were wondering, no, the reindeer are not allowed in the house. Though, they apparently do try to get in, especially during the summer months to get away from the bugs. Jane did share a story about finding Olive hanging out in her living room. Can you imagine?

At the end of the walk with the reindeer, we went to their house for coffee/tea/hot chocolate and homemade chocolate chip cookies. The cookies are Jane’s daughter’s special recipe and selling these was a primary way that she raised money to purchase her first reindeer. Jane carries on the tradition by offering them to tours.

When to Visit Running Reindeer Ranch

You can visit Running Reindeer Ranch any time of the year. As you can see, we visited during the winter. It’s cold, but they have boots you can borrow as well as gloves and some other things to help keep you warm. Once we got walking, it wasn’t too bad!

You can also go during the nice weather in the spring, summer, and fall. You can do walks with the reindeer at any time of year. Of course, the summer is lovely but they are so cute, there really isn’t a bad time to go.

And here’s another thing I recently learned—you may have heard of goat yoga and even puppy yoga. Well, you can even do reindeer yoga! I may seriously head back during the summer just to do yoga with these guys. They are a lot of fun!

Running Reindeer Ranch may be the #2 thing to do in Fairbanks according to TripAdvisor, but it’s number one in my book! It was so much fun to learn about reindeer and to get to meet and hang out with the herd. Where else can you do that?

We went for a short walk and learned all about the reindeer. Amazingly, the time passed very quickly and this desert dweller did not freeze to death!

The reindeer may not fly through the air, even on special holidays, but they really are incredible animals. It was a lot of fun getting to know them and their hilarious personalities. This is a special activity not available in many parts of the United States and well worth going. And if you need more incentive, the chocolate-chip cookies were really good!

You May Also Like Top 21 Things to do in Fairbanks: The Ultimate Winter Guide

There are so many fun things to do in Fairbanks, Alaska in the winter. This includes not only visiting Reindeer Ranch but also viewing the northern lights if you are lucky and dog sledding.