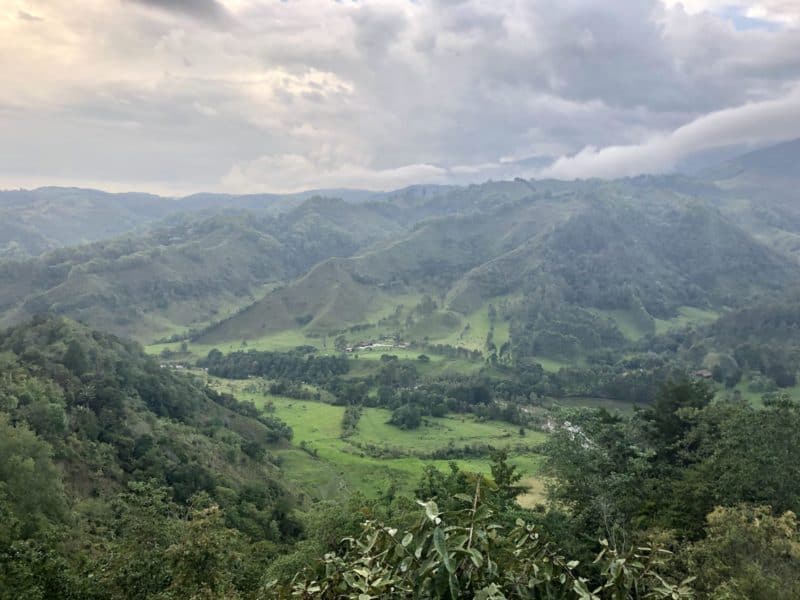 When I told people I was heading out on a Colombia vacation, most of the reactions fell into two groups: a blank stare, or a litany of how dangerous Colombia is and that drugs and violence are rampant.

My personal favorite was someone who talked about drugs and violence but then said, “oh, but they have really good coffee there.”

But seriously, what do you need to know for a Colombia vacation? Of course, we have all heard of the “infamous man of Medellin,” Pablo Escobar, and his wildly successful (depending upon how you define success, of course), cocaine empire of the 80s and early 90s.

I personally knew of him but not very much. Now there is the Netflix show, Narcos, to fill in any gaps. Because Hollywood always gets it right.

For those who think I lost my mind going, I will say that I did check the United States State Department site to see what my country had to say about the safety of tourism for a Colombia vacation.

It was a 2 out of 4 (4 being very high-risk countries like Iran and Iraq). If my country thought it was safe to go, I thought it was worth investigating.

What You Need to Know for Your Colombia Vacation

What I found was a pretty amazing place. Colombia is a poor country overall marked by a huge chasm between the rich and the poor—perhaps even greater than that we find in the United States when we talk about the 1%.

Yes, that’s right. In a country where corruption is rampant, the politicians are the top of the socioeconomic ladder. Let that sink in for a few minutes.

Colombia is marked by a history of corruption and violence by the government and this was something I heard consistently in every single walking tour I went on. Sometimes government-sponsored violence was done indirectly through para-military guerrilla groups acting on behalf of the government.

At other times the government either assumed responsibility or was believed to have been responsible. So much of the violence throughout Colombia’s tumultuous history was done by or on behalf of the government.

Why the White Powder?

So, when you think about the people in a poor country trying to carve out a means to live and you consider the opportunity from the notorious white powder—sure, it’s dangerous. But life in Colombia during many periods in history was dangerous.

In Medellín, we saw a wall decorated with the names of those who went missing during particularly violent periods of time not by drug cartels, but by the government.

When an opportunity for more money than you ever thought possible presents itself with some risk, but with a huge reward, perhaps it doesn’t look so bad. Particularly when you not only can’t trust your government to take care of you, but you can’t even trust them to protect your basic safety. Some people may think–why not?

I don’t pretend I know everything about the long history of this country and I certainly don’t mean to simplify or to glorify it. However, once you understand even a little bit of what the people have endured over the last few hundred years, it seems to put things into perspective.

It seems, to me, at least, to make a little more sense why people would risk their lives, and the lives of their families for a life of crime.

The Colombia I saw was of incredibly hard-working and resilient people. The guides I met shared stories of their childhoods seeing dead bodies on their way to school and being gunned down in random machine-gun fire. When you grow up as a small child with this kind of violence, how can you not become desensitized?

And yet, there is a strong sense of pride among the people. They are proud to be Colombian. They live loud and proud, with loud voices and loud music showing their emotions openly. These people have lived through such adversity and have hope for the future.

Their optimism is so appealing and it’s impossible to resist. Colombians would prefer to not look backward but instead, to look forward. Because no matter where they have been, things will continue to get better.

And they are, as evidenced by the increases in tourists. With tourist dollars flowing into the country, the life of many Colombians improves and optimism continues to increase.

The “Infamous Man from Medellin”

Does the name of the “infamous man from Medellin” come up? Of course, how could it not? He was mentioned on every walking tour I took.

And not just in Medellín, but also in Cartagena and Bogota. His home on the lake in Guatape was noted.

People share stories from those times and although it sounded like those in the cities were much more impacted than those in the country, all live under the cloak of that being the best-known thing about Colombia.

I saw a cart in Manizales selling t-shirts with his face on them.

The people I spoke with would rather talk about something else, anything else, other than what they view widely as a dark stain on their history. However, they understand that he is still a person of interest for many and that tv shows like Narcos glorify his life.

They talk about him to provide a real-life perspective of the man and what life was like when he was alive, and they seem to will you to talk about other things of more interest and more reflecting of the people as a whole.

People may capitalize on his infamy with t-shirts with his picture and tours in his name. Locals will talk about him as they know they must, but then they’d rather move on. It’s not a point of pride, certainly. But it’s what people know about Colombia.

Well, except for the coffee.

What You N to Know about the “New” Colombia

The country has found peace now, following the 2016 peace accord. between the Colombian government of President Juan Manuel Santos and the Revolutionary Armed Forces of Colombia (FARC-EP).

It took more than four years to secure approval, and ultimately was pushed through and ratified by Congress. The conflict had been going on since the 1960s with for formation of FARC, one of the dominant guerrilla groups in the country.

Though only just under 50% supported the treaty, people are hopeful that this marks a new era in Colombia. Tourists are coming by droves, finding a country with a lot of history, culture, beauty and a culinary mecca at very low prices for most of the world.

The various regions in Colombia offer very different experiences, from beaches and a feel in the Cartagena area to the cloud forests, rain forests, and jungles through much of the country and the mountainous cities of Medellin and Bogota.

Would I recommend a Colombia vacation? Is Colombia safe? I’d recommend a visit absolutely and without hesitation. Be open, do your research about places to visit in Colombia, and learn what you need to know. Most of all, be open to learning.

And yes, the coffee is really good.