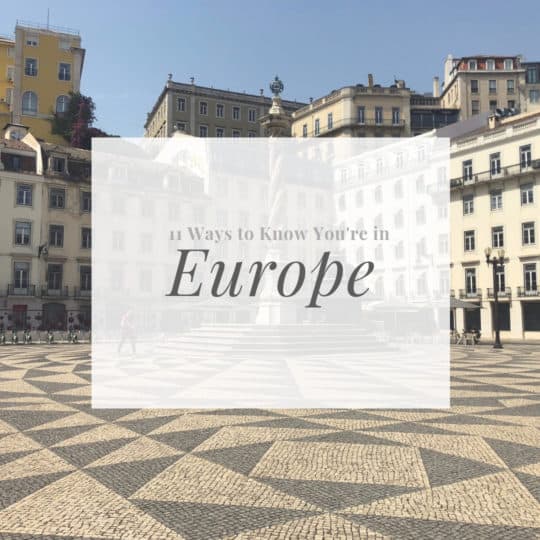 As an American traveling abroad, I have noticed some fun and interesting trends when I travel in Europe. Some of these things may be similar in other countries in other parts of the world as well.  They may not necessarily be consistent in all European countries. This list of “Eleven Ways to Know You’re in Europe” is intended to be a bit of fun so I hope you will appreciate the spirit in which it was written.

11. You Won’t Find a Sandwich with a Half-Pound of Meat

If you believe the marketing with some American companies, bigger is better. There are many examples of this: Arby’s proudly markets its half-pound sandwich. A European sandwich: gloriously crusty and often fresh-baked oh-so-good bread, a thin slice of ham/meat and an equally thin slice of cheese. Often you see no lettuce or accompaniments. It is thin, at least by American standards, and it will be the best sandwich you will ever have.

When you go to a store, whether it be a supermarket/grocery store or a small shop, remember to bring your own bag to carry the items you purchase. Some stores will offer bags at an additional cost, but not all. I always pack a small “grocery store bag” when I travel internationally, though often make an unplanned stop requiring that I get creative finding a way back to where I’m staying. I did this on my last trip to Europe, thinking how my plastic bag was safely nestled in my suitcase while I was busy balancing my groceries everywhere I could think of. On a positive note, you rarely, if ever, see this.

9. Napkins Consist of  One Small Square of Single-ply Paper

The napkin (yes, the singular napkin) provided is around the size of a toilet paper square. You generally get one with a sandwich, pastry, etc. Some restaurants and stores have a napkin dispenser for you to get more, and you also get a single napkin at a time. If you ask for more napkins, you get—that’s right—one.

A coffee (or café, caffé, etc.) in much of Europe is espresso or an espresso-based drink. Many places do offer the drink, Americano, which is similar to the coffee that is typically drunk in the United States, made by adding hot water to espresso, changing the small, strong shot of espresso into a weaker, larger cup of coffee that is more similar to drip coffee. While the taste is similar, the process to make the coffee is different. Coffee lovers will notice a difference, regardless of which they prefer.

Maybe this one is just me, but whenever I go to Europe I feel like the dowdy old aunt of the cool people. Even if a European is wearing jeans and a t-shirt, there is just something about the way that he/she carries it off. Perhaps it’s the sophisticated scarf tied expertly in a “not-making-much-effort” but looking blissfully stylish regardless. You can very often identify the Americans from their white sneakers but you won’t generally see a European in white tennies.

I’m not sure of the driving rules of every country I have been to in Europe, but I have found that people make a concerted effort to not plow down people in a crosswalk. On my recent trip to Portugal, drivers came to a screeching halt to avoid pedestrians in crosswalks. I have not found this to be the case when people cross a street outside of the crosswalk, and it reminds me of the Atari game, Freeway, that I used to play as a kid.

5. People Walk at You

This varies greatly between countries, European and otherwise. I have found in general, Americans make more of an effort to steer their path away from oncoming people than many other countries do. When I kept my course to test this, I had several near collisions where the person side-stepped at the last possible minute.

4. People You Don’t Know Stand Right Next to You

This is both a cultural thing and a personal thing. I like a lot of space around me and unless I know a person very well, I’d prefer they not be in “my space.” I remember visiting Sweden for the first time with a friend who was from there but lived in the United States for a number of years. We were standing in line and a man was literally pressed up against my back. I was bristling and looked over to see her giggling. When I inquired as to the concept of personal space in Sweden, her giggles became full-fledged laughter. “Personal space?” she said. “I don’t believe there is any such thing in Sweden.”

3. Wine is Cheaper Than Water

In most of the European countries I have visited, a glass of wine is cheaper, and often, substantially cheaper than a bottle of water. In Portugal, for instance, I got a glass of wine for €1,50, though the price did vary between establishments. A bottle of water cost around €2.50 or €3. I like the way the Europeans think, and perhaps it’s something to consider to get our fluids from the grape.

The United States, in general, doesn’t do a great job requiring other languages in school, however, much of the world does. I took a couple of years in two other languages, and have occasionally found them to come in handy when I travel to Europe. However, my stammering “first-grade level” of the language is never as good as the people to whom I’m talking. I find that I become Jedi master of charades, trying to pantomime what I mean in context, hoping the incredibly patient person I’m trying to communicate with will understand.

I have had this conversation so many times:

“Do you speak English?” (often stammered  by me in a vain attempt in the local language with horrifically poor pronunciation and grammar.)

“A little. My English is not so good.”

People say they don’t speak much English, then proceed to speak at a fluency level better than many native English speakers. It has happened so many times that usually my next statement is something like:

“I can guarantee that your English is by far better than my–French, Italian, Spanish, etc.”

Tips for Eleven Ways to Know You’re in Europe

This list was written in fun based on some observations I have found consistently when traveling in many European countries. Some poke a little fun at Europeans and some poke fun at Americans as well. I hope these are helpful for preparation and noticing differences when traveling. I think that’s part of the fun!

If you’re interested, you can read all about my European travel adventures.