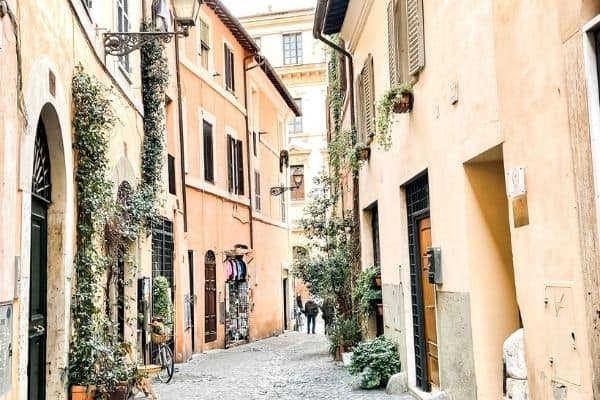 A charming and historic area to visit is the Jewish Ghetto of Rome.

It’s a little off the beaten path from many guidebooks and tours, though it’s close to other tourist attractions and well worth seeing. Especially if you want to learn more of the history of Rome—the good and the bad.

Are you intrigued? Here’s why you should visit the Roman Ghetto, and what to see when you do.

The Jews of Rome have a long and interesting history. They emigrated in the 2nd century BC directly from the Holy Land seeking to establish business ties with Rome. It’s the oldest Jewish community in all of Europe.

Just as any other foreigner in Rome at the time, they lived in the Trastevere neighborhood, meaning “across the Tiber.” This neighborhood is located on the outside of the Tiber River that runs through Rome.

The Romans appreciated the Jews, and the Jews, as a result, had a safe place in Roman society. However, after the fall of Rome and the rise of Christianity, they were denied certain rights as citizens. This fluctuated depending on which Pope ruled Rome at the time.

Over time, the Jews moved across the Tiber to the area of the Jewish Ghetto today. Then in 1492, when the Jews were expelled from Spain during the Spanish Inquisition, life in Rome began to change.

In 1555, Pope Paul IV forced all of Rome’s 4,000 Jews to move to an area across the Tiber from Trastevere. It was in a flood zone, and they lived in this ghetto in cramped conditions with a curfew for several centuries.

When Napoleon took the city in the early 1800s, things started to improve. The ghetto walls were removed and they were later granted full rights of all Roman citizens. Much of the ghetto was razed during this time and modernized, with wide streets and large buildings as it looks today.

20th Century and Beyond

This time was short-lived though, as less than a century later, there was a rise of fascism. In the early morning hours of October 16, 1943, the Nazis surrounded the area. Between 1,000 and 2,000 Jews were forced from their homes, and loaded onto a train to Auschwitz. Only a few returned.

You can see the stark reminder of those who never returned in these square plaques resting in front of the doorways of their former homes.

The Rome Jewish Ghetto is a desirable area today. The banks of the Tiber were stabilized and raised so it no longer floods. The streets are wide and the buildings beautiful, with only a couple of narrow passageways remaining from the original ghetto.

The Via Del Portico D’Ottavia, the main street in the area of the former ghetto, is lined with Jewish restaurants. Many of them are Kosher in the traditional dietary style of the Jewish people. Fried artichokes are a local specialty, and one I highly recommend!

The roads are wide and light floods the ghetto, in stark contrast to how it used to be. The walls are no longer there as well, so it’s really not a ghetto any longer, but it’s still referred to as it was the original location.

Most of the structures in this area were built in the 19th century. And this area is mostly pedestrian-only, except for a narrow window where deliveries are allowed.

Though some of the Jewish families have stayed in this area, many have moved to other Roman neighborhoods. You’ll still find many Jewish restaurants, the Jewish school, the Great Synagogue, and a Jewish bookstore.

It’s one of the most historic and interesting neighborhoods in the city.

Where is the Jewish Ghetto Located?

The Roman Jewish Ghetto is just a short walk from the back exit from the Roman Forum. Simply cross the street and walk between Marcello’s Theater and the Portico D’Ottavia to the right and there you are!

Just a few minutes away, over a bridge crossing the Tiber River, is the popular Trastevere neighborhood. You almost need to cross through the ghetto, so it’s worth visiting. Both for its restaurants and its history.

What to See in the Jewish Ghetto of Rome

The Jewish Ghetto of Rome isn’t very large and you can walk through it in under 30 minutes. there are a number of things to see and do in this area or immediately nearby that are worth seeing.

This is the main road in the Jewish ghetto. It’s lively and bustling with restaurants, locals, and tourists. It is a pedestrian drag, so with the exception of a few hours a day when delivery trucks are allowed, you can walk unencumbered.

It’s hard to imagine that this wide road was once part of the old ghetto. At that time, it was dark, cramped, and not a great place to be. However, now it’s a lovely area and quite lively.

The massive Great Synagogue is the true heart of the Rome Jewish Ghetto. Although it was opened in 1904 after this area was no longer a Jewish Ghetto, it’s still where many of Rome’s Jewish families remain.

This building is a visible icon of the community’s integration with Rome after the 300 years of segregation in the ghetto. Of course, the walls coming down was a start to that, and now the synagogue stands as a reminder.

The synagogue is still in use today and also houses the Jewish Museum of Rome. It stands high and its square dome stands apart from the many domed churches in the city.

Though Tiber Island is actually on the outskirts of the Roman Ghetto, you may want to visit it when you see the ghetto. Certainly, if you’re crossing the Tiber to get to Trastevere, you will see it.

Tiber Island is actually the smallest inhabited island in the world. Cross Ponte Fabricius, a bridge that was built in 62 BC. It’s the oldest standing bridge in Rome!

Now, you may hear some Romans say that only true Romans hail from Tiber Island. Is that true? It’s possible, given that there is a hospital on this little island as well!

One of the most interesting areas of the Jewish Quarter is the Portico d’Ottavia. It dates back to the 2nd century BC. The remains of massive marble columns once proudly framed ancient temples dedicated to Juno Regina and Jupiter.

In the Middle Ages, the ruins became the city’s fish market. You’ll see a church that was built into the area that served for conversions of the Ghetto residents to Christianity.

It’s such an interesting area with a mix of architectures dating to very different periods. If you’re coming to the Roman Ghetto via the Forum, you’ll pass by this and Marcello’s Theatre next to it.

Located on the edge of the historical boundary of the Roman Jewish Ghetto and across the street from the ancient Roman Forum is Teatro Marcello. It is not a Colosseum nor THE Colosseum (there is only one), but another amphitheater.

Marcello’s Theatre was built before the Colosseum, commissioned by Julius Caesar and completed by Augustus in around 13 BC. It was the largest in ancient Rome of its time and could hold 20,000 spectators.

Unlike the Colosseum, this theater was used for plays and poetry readings. The upper floors were later converted to apartments and they are still used today. It’s now owned by the Orsini family, one of the oldest Italian noble families.

Many people mistake this structure for the Colosseum when they first visit Rome. It does look similar! But actually, this theatre was built BEFORE the Colosseum!

The Turtle Fountain is a lovely stop in a tour of the Jewish Ghetto of Rome. It was designed in the 16th century by Giacomo della Porta, though there are some rumors that Bernini may have had a hand in it as well.

As the story goes, it was constructed in a single night by Taddei Landini as a way for the Mattei Duke to prove him worthy of his bride after the wedding was canceled.

It was originally created to provide water to the residents of the ghetto. However, it was moved to this quarter shortly after.

It’s in a small piazza just a block from Via del Portico D’Ottavia, the main road in the ghetto. It’s such a lovely place to sit and enjoy this area.

How to Visit the Jewish Ghetto of Rome

Given that history is such an integral part of this area, I highly recommend a tour guide who is familiar. You’ll find guides who specialize in the area and others who know Rome’s varied history and also know a lot about this area.

Here is a tour that focuses on the Rome ghetto. You can also go on a small group tour of Trastevere and the Jewish Ghetto, two of my favorite areas in Rome. If cooking is your thing, check out this cooking class with traditional recipes from the Jewish quarter.

I do recommend visiting this area on a tour so you learn the history. However, if you want to do your own walking tour, here is a map showing the synagogue for orientation.

There are a lot of amazing restaurants in this area and if you don’t try one when you visit Rome, you’re really missing out. Many do follow Jewish kosher dining customs, though not all do.

The primary one you might see is according to tradition, Jews don’t eat milk and meat together. And another is that they don’t eat products from a pig. If you think of all the incredible foods you could get in Rome, this certainly won’t stop you from an amazing meal.

Here are some of the top spots for dining in the Jewish Ghetto:

If you go in the morning and want to find a great bakery, check out Pasticceria “Boccione” Limentani. They serve Jewish-Roman-style foods including traditional cakes and tarts. They are known for their double-crusted, over-stuffed crostata. Not sure where it is? Just look for the monstrous line and you can’t miss it!

No matter where you go, you’ll have an amazing meal. You’ll never go hungry in the Jewish quarter!

Rome is an incredible city to visit full of history, culture, and incredible cuisine. Take this step off the beaten path to the ghetto to get another side of Roman culture and history you’ll never be able to forget!