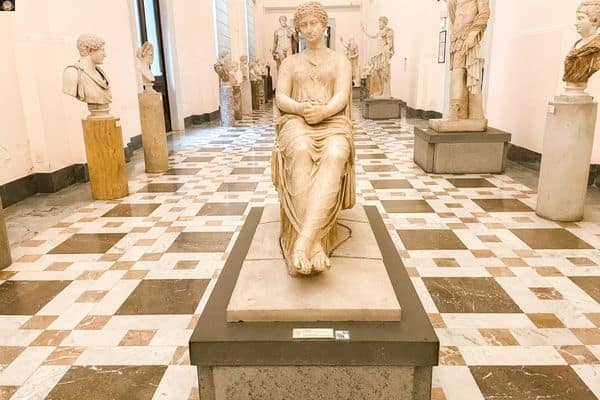 Why should you visit the Naples National Archaeological Museum?

Everyone knows Pompeii is a top draw to the area south of Naples between the city and Sorrento. Millions of visitors go every year to get the opportunity to step back in time to this one thriving community.

It’s exciting to see and incredibly interesting, but if you want to see how the people of Pompeii really lived, you’ll want to check out the Naples National Archaeological Museum. Visiting this museum, along with a trip to Pompeii, really help visitors to see what life was once like in this city before the days of the eruption of Mount Vesuvius.

Pompeii is a bucket-list visit for many people, but don’t miss the Naples National Archaeological Museum. Read this to find out everything you need to know about a visit, including why you shouldn’t miss it!

What the Naples National Archaeological Museum Is

The building itself is interesting and was formerly a calvary barracks in 1585. It later became part of the University of Naples, and later, in the 19th century, a museum. Originally it was called the Royal Bourbon Museum (Real Museo Borbonico), and finally to its current name.

This is a top tourist attraction in Naples, and if you’re visiting this city you won’t want to miss it. I’d also say if you’re in the region, consider making your way to Naples to see it. We did and it’s really worth your time!

Why You Should Visit the Naples National Archaeological Museum

There are a lot of incredible exhibits in this museum. If you’re interested in history and culture, it’s absolutely worth seeing. There are a couple of notable exhibits located in MANN mentioned in the next section.

What makes this museum really special is that you’ll get to see how people lived in ancient Rome. You’ll get insight into how they thought and what they believed.

See their art, their jewelry, their frescoes, and their housewares. It’s amazing and gives you further insight into what their lives were like in these incredible cities.

Visiting sites like Pompeii and Herculaneum almost echo with waves from the past. You can close your eyes and almost feel like you’ve traveled back in time. But being in this museum has the feel of stepping into their lives.

You’re not just in their homes and businesses, but you’re surrounded by the people who once lived there.

There are a lot of different exhibits at the Naples National Archaeological Museum. There are two massive and impressive exhibits in the museum that draw a lot of attention.

One is the Villa of the Papyri, carbonized from the Mount Vesuvius eruption in Herculaneum in the mid-1700s. You’ll see ancient Roman bronzes from here as well.

The other is the famed Farnese Collection. It includes the Farnese Marbles, a hall of incredible marble statues. You have probably seen these images before, including the Farnese Hercules, the Farnese Atlas, the Farnese Bull, and more.

Also, there are a number of other famous pieces dating back to the Medici in 15th century Italy as well. There is an extensive mosaic collection from Pompeii and other cities in the area, including the Alexander Mosaic from the House of the Faun in Pompeii.

And best of all, perhaps, if you’re a history lover and visiting the area specifically to see Pompeii and Herculaneum, you’ll want to visit MANN. Here you’ll find extensive artifacts removed from the Pompeii and Herculaneum sites from homes and other buildings. Artwork, statues, and everyday items give incredible insight to live in these cities.

How to Visit the Visit the Naples National Archaeological Museum

The NNAM museum is located in Piazza Museo, a large and quite busy area in central Naples.

It’s easy to visit the museum as it’s very accessible by public transportation. There are two stops near NNAM, including line 1’s Museo stop (it’s a short walk of only a minute or two), or the Piazza Cavour stop on line 2.

There are several bus routes that run near or to the museum as well (including the 147, 182, and 201). Taxis are also plentiful in the area, especially from the cruise port, the train station, or the airport.

The entrance ticket does not include the Magna Grecia collection. There’s a separate ticket for this section that costs 1,50 Euros (around $1.50 USD).

Plan to spend at least two hours at the museum, and possibly more. There’s a lot to see and if you’re a history buff or visiting Pompeii and Herculaneum and want that added perspective, you’ll want some extra time.

When I visited, there were two lines for entrance: one for people with tickets and one for those without. However, it was raining and the line was long so they were blended together. Once you get to the door, as about the place to go if you have a ticket so you don’t wait in the longer line for those purchasing them.

Get a map of the museum so you make sure you see everything you want to see. There’s a lot here! And there is limited entry to the Secret Cabinet and a line will form. It does move fairly quickly.

Top Things to See in NNAM

There’s a lot to see in this museum and though you should plan to spend at least two to three hours exploring, you could easily spend a lot more than that. If you want to prioritize your time, here are some of the things I especially enjoyed during my visit.

Of course, there are a lot of other things to see, but these are what I noted and would recommend. There are also everyday items from Pompeii and Herculaneum which help you to imagine what life was like when these were thriving cities.

What to See in Naples

If you’re visiting NNAM, it’s worth seeing Naples as well. Unfortunately, it dumped rain on the day I was there so we didn’t get to see a lot of this thriving city. We did get to walk around for a couple of hours though, which was enough time to make it worth going back!

We did a Rick Steeves walking tour on the app to see some of what Naples has to offer. Here are some of the places we visited, as well as a few other tourist favorites.

When you visit a city like Naples, it’s as much about the food as it is about the sights. So, read on to see some of the best Naples restaurants!

If you’re coming from a cruise and only have a day in the port, check out this day tour of Naples.

Perhaps one of the most famous ancient Roman sites, Pompeii is a must-see place on anyone’s bucket list. This once thriving commercial city was destroyed by the Mount Vesuvius eruption in 79 AD. You can walk the once bustling streets and visit this incredible place.

Check out this tour of Naples and Pompeii!

Pompeii wasn’t the only city destroyed on that fateful day. Nearby Herculaneum was also in the path of the Vesuvius destruction. Though this wealthy beach-front town isn’t as famous as Pompeii, it’s actually better preserved. In fact, it’s worth seeing both to get a glimpse into the past. Herculaneum was much smaller but this city’s secrets are still being found.

One of the most popular places in this area to visit is the Amalfi Coast. This striking UNESCO World Heritage site consists of 13 picture-perfect small towns perched on steep cliffs. Whether you’re able to spend a few days or even just a day trip, it’s well worth a visit. Read this post to learn about the best cities on the Amalfi Coast to visit if you have time for a day trip.

Want to spend a day in Positano? Don’t worry about the transportation to Positano with this tour. It includes hotel pickup and an English-speaking driver. Or, go to the charming small town of Ravellohttps://www.viator.com/tours/Naples/TRANSFER-FROM-NAPLES-TO-RAVELLO/d508-88005P14?pid=P00060528&mcid=42383&medium=link instead.

For something a little different, take a ferry to the isle of Capri. From striking cliffs to incredible high-end shopping, and historic exquisite churches to quaint small towns, Capri has a little of something for everyone. Don’t miss the famous Blue Grotto if the weather is good!

Where to Eat in Naples

If you’re a fan of Neapolitan-style pizza, then you’re in luck! Naples is certainly the place to be. It can be tough to choose where to eat as there are so many great options!

Whether you want pizza or some other Italian food, there’s no shortage of amazing places to eat here. And save some room for dessert, as you won’t want to miss it.

In case you’re tempted to skip straight to dessert (and yes, you’re my kind of people!)—don’t. It’s well worth eating in this incredible foodie town! Here are some of the top spots.

If you walk around a bit and work up an appetite after a hearty meal in Naples, don’t skip dessert. For something uniquely Neapolitan, try a sfogliatelle.

It’s sometimes called a bear claw in the US but it’s truly no comparison. The layered crispy shell with ricotta-based cream inside, something with orange or almond flavoring. Holy wow, it’s good!

How to Get to Naples

Naples is easy to get to and it’s a hub city in the area south of Rome. The Naples International Airport (NAP), also called Capodichino Airport, is just a couple of miles from the center of Naples. You can get a cab to the historic city center for under 20 Euros ($20 USD).

If you’re in Rome, there are regular trains to go to Naples. There is also a high-speed train that runs frequently from Rome to Naples that only takes an hour and fifteen minutes. It’s comfortable and affordable.

Naples is also on a ferry line, so you can easily get to and from Naples from Sorrento, the Amalfi Coast, and Capri.

How to Get Around Naples

The historic city center area of Naples is very walkable and it’s fairly easy to get around on foot. However, it is quite congested and drivers can be rather aggressive in this area. If you do decide to walk, be careful.

Taxis are plentiful in Naples. There’s also good bus service and a Metro that runs with many stops around the city.

If you’re in Naples, or even if you’re in Rome, don’t miss visiting this incredible historical Museum. At a minimum, plan to spend a couple of days exploring Naples and the museum, and even better, visit Pompeii and Herculaneum as well. It’ll give you a glimpse into the past of Ancient Rome that you can’t get anywhere else!