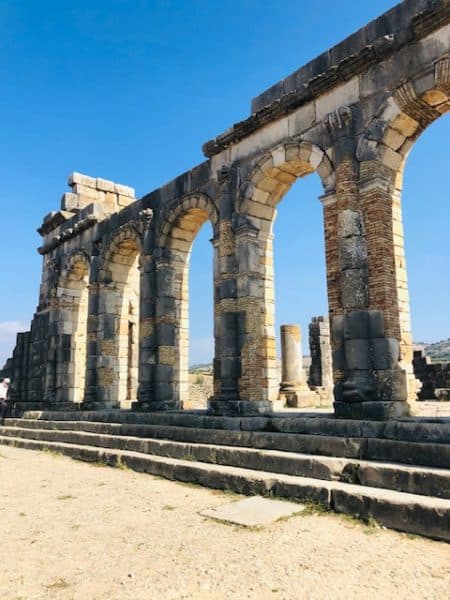 Did you know there are Roman ruins in Morocco? It’s amazing when you look at maps of the “old world” and see the reach of the Roman Empire—where did the Romans not go?

Getting to tour the Roman ruins of Volubilis in Morocco was a special treat and a really interesting contrast to the rest of Morocco. Here’s what you can expect when you visit and what not to miss when you go.

The History of Volubilis in Morocco

Volubilis is one of the best-preserved Roman ruins. Our guide said it is named after a flower similar to the morning glory. It is located between the Imperial Cities of Meknes and Fes and was founded in the 3rd century B.C. by the local Berber people. In 146 B.C. it fell under Roman rule.

In 25 B.C., it became the capital of the Roman state Mauritania under King Juba II. He married the daughter of Mark Antony and Cleopatra and adopted Roman tastes. King Juba built the city in the Roman architectural style. This now partially-excavated Roman ruin became an important outpost for the Roman Empire in the time.

At its peak, around 20,000 people were believed to have lived there. The town wealth came from agriculture, and the fields surrounding the city in every direction proved rich for olive and grain growth.

Tensions grew when residents started pressuring Rome for status and financial concessions. local tribes were also putting pressure on the city. This led Rome to walk away from the settlement in 285 A.D.

After the Romans Left

The Roman ruins of Volubilis remained empty until they were destroyed by the Lisbon earthquake in the mid-18th century. Moroccan rulers then used some of the stone for building the nearby city of Meknes which rose to power and became an Imperial City.

In the late 19th century, when Morocco was under French rule, the ruins were identified as the ancient city of Volubilis. During this time, and unofficially earlier in the same century, around half of the site was excavated by the French.

Then, in 1997, the Roman ruins of Volubilis became a UNESCO World Heritage site.

The Roman Ruins of Volubilis

People are able to tour the site of Volubilis with or without a guide. There are no restrictions on where to go or what to touch at the site.

You will see the ruins of many distinctly Roman buildings, including a triumphal arch, basilica, and forum. They lie against a backdrop of the lush Moroccan fields that once made this city so wealthy.

If you have read more than a few of my posts, you will know that I love UNESCO World Heritage Sites and actively seek them out when I travel. Why? Because they are always amazing!

This organization is dedicated to preserving these world treasures and I love supporting their work and seeing the results of it. They choose places with natural, cultural, architectural, scientific or other significance and fund preservation efforts seeking to protect them from damage.

My Visit to the Morocco Roman Ruins of Volubilis

I’m a bit of a history nerd nut and love all historic architecture. Getting to see the Roman ruins of Volubilis was definitely one of the highlights of my trip to Morocco.

It’s such a striking contrast to the Moorish architecture to see the distinctly Roman pillars and arches.

You can see many of the typical Roman public buildings and monuments, like the Forum, triumphal arch, basilica, and a temple, as well as a Roman bathhouse.

You can also see the ancient ruins of many old homes. Some of the largest and wealthiest houses had mosaics that have been partially, and painstakingly, restored for viewing.

When you enter the ancient Roman ruins of Volubilis, you walk down some steps to an area with a small museum. It includes some mosaics and carvings as well as some artifacts unearthed in the excavation.

You can also see a large map of the Roman Empire that shows just how far it spread. It’s pretty incredible to think of it!

The Arch of Caracalla is one of the structures that stands out among the ruin. It is situated at the end of the city’s main street. The arch was built by the governor, Marcus Aurelius Sebastenus, to honor the Emporer Caracalla. It was constructed from local stone.

There was a bronze chariot pulling six horses on top of the arch and there were statues of nymphs pouring water into a marble basin at the foot of the arch.

There was also a large public fountain in front of the arch, large enough for people and horses to use. You can see the stones worn smooth in areas from where the horses used to stand to drink.

These public thermal baths were supplied with water from the aqueduct. Roman baths were an integral part of their society back in the day serving both practical use and a cultural one.

People sat on the hot stones for their weekly wash as they did not have public water running to their homes. The baths also were a place for people to catch up on the latest gossip around town.

If you’re interested in Roman baths, you can try a Moroccan hammam, which is similar. A Moroccan hammam is a traditional Moroccan bath and it’s a fun thing to do when visiting Morocco.

This temple was erected to honor the Roman gods Jupiter, Juno, and Minerva. According to our guide, a council met at the temple to declare war, and then later returned here with their winnings.

Our guide told us this was only one of two located in northern Africa, with the second at Lepcis. It was built in the early 3rd century A.D. and was part of the forum complex.

One of the highlights of a visit to the Roman ruins of Volubilis is the extensive mosaics that you can see in the ruins of some of the excavated private houses. There are many throughout the site and they are stunning and intricate.

There is also some humor in the mosaics: there is one of a man riding a horse backward in a parody of sorts. You can see stories of Hercules and many others from famed Roman stories.

This building was an olive press, and you can see the press in the foreground of the picture. Agriculture, and particularly olive growing was a significant contributor to the wealth for the city of Volubilis. In walking through the ruined city, you can see a couple of olive presses.

Olives can be used for many things and they were in Roman times as well. Of course, you can eat the olives and make olive oil, which is made from the first press. The second press is used for making products for the skin and face. The third was used for light in lamps.

The columns on the left lined the main road in Volubilis, called the Decumanus Maximus. It ran the length of the city and ended at the Arch of Caracalla.

If you close your eyes, maybe you can envision the busy scene. It was filled with people going about their days, catching up with friends, shopping, and walking around.

The Roman ruins at Volubilis are open daily from sunrise to sunset. Entry is 70 Dirhams ($7.25 USD) and you can hire local guides for around 150 – 200 Dirhams ($15 to $20 USD). It’s a good idea to hire a guide as there are few signs at the ruins to indicate what you’re looking at.

Volubilis is around 22 miles (35 km) away from the city of Meknes and 50 miles (80 km) from Fes. Most people who visit the site stay in one of those cities.

Unfortunately, there is no public transportation directly from either city. You either need to rent a car, take a taxi, or join a group tour. There are a number of group tours from Fes.

If you decide to take a taxi, there is a train that goes from Fes to Meknes to reduce the cost of the taxi ride. You can also ask your hotel or riad in either city to see if they offer any organized tours to Volubilis. You can also visit Volubilis by car from Casablanca and it’s a little over three hours.

There is little protection from the sun at this site, so keep that in mind when you visit. Summers get really hot and even in the winter (I went in November) it can be quite warm.

Make sure to bring a hat, lots of sunscreen, and water to drink. Facilities are limited. There are some food carts and a small place to buy snacks right outside the ruin but there is no restaurant. There are bathrooms available for use.

Final Thoughts on the Ancient Morocco Roman Ruins of Volubilis

Volubilis is an impressive place to see, for the reconstructed buildings and the mosaics. I love walking through ruins like this, closing my eyes, and picturing what it was once like for those who lived there.

It does take some creativity and openness to try to visualize the city that it once was, but you can see glimpses of it everywhere. It’s an incredible place to visit and such a unique area in Morocco to see.