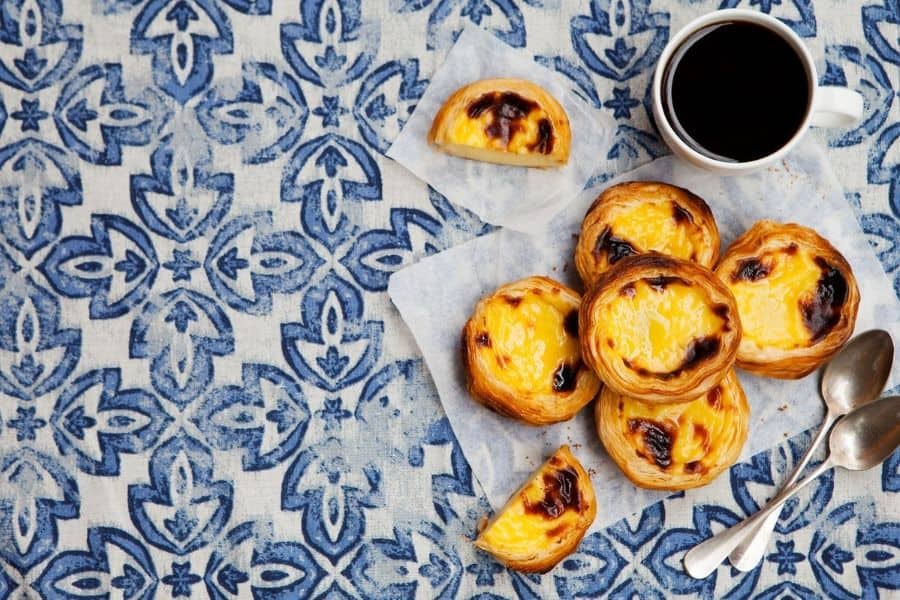 Portugal is a country that loves its pastries and they make many incredible options. Sweet or savory, you really can’t go wrong with anything you choose. But, if you want to try the quintessential Portuguese pastry, most people would say the Portuguese egg custard tart, pastel de nata. And the best? Pastéis de Belém.

I decided to take up the challenge to see which I thought was best: pastel de nata or Pastéis de Belém. Here are the results of my very non-scientific but tasty study.

What is a Pastel de Nata?

A pastel de nata, or pastéis de nata, is a Portuguese custard tart. It’s an egg custard baked in a pastry shell dusted with cinnamon. They originated in Belém and it’s believed they were created in the 17th century by Catholic monks at Jerónimos Monastery (also known as Hieronymites Monastery).

Egg whites were used for starching the habits of the nuns and friars in really large quantities. So, they were seeking a way to use the leftover egg yolks. They often used them to make pastries, and you’ll find pastry shops everywhere throughout the country as a result. And let me tell you, the Portuguese really know their pastries! You really can’t go wrong with anything, though there are a number of specialties, including pastel de nata.

You May Also Like What Makes Portugal So Special

Then in the 1800s, many convents and monasteries were closed. Monks began selling pastel de nata to raise revenues for their churches. Jerónimos Monastery was closed in 1834, and they sold the recipe. The new owners of the recipe opened the Fábrica de Pastéis de Belém, known as Pastéis de Belém. The decendants still own the business until this day and it is said that only 3 people know the recipe, which is kept locked up for safety.

Pastel de nata are available at most pastry shops in Portugal, and they are a celebrated treat.

Before I went to Portugal, I really had no idea about the Pastel de Nata. And to be honest, foodie that I am, I’d love to say that I research beforehand and investigated this tasty treat. But in truth, I stumbled upon my first one. Here’s the story…

On my first full day and still a bit scrambled from jet lag, I signed up for a free walking tour of Lisbon to get my bearings. As I made my way to the meeting place, I realized I was hungry and had forgotten breakfast. Who knows what time zone my body was in, anyway?

I saw a shop where people were spilling out of and figured it might be a cafe, so I made my way there. As I approached, I noticed a delightful smell and was happy with my choice already. I opened the door and saw only one pastry. When I asked what it was, I was told it was Portuguese egg custard.

Well, egg custard is ok enough though honestly, not my favorite. But, I wasn’t sure what else was around so I got one and made my way to the meeting place. It was warm and smelled really good and fit perfectly in the palm of my hand. When I got to the square, I took a bite. I can’t begin to describe the sensations that spilled over my tongue. It was creamy, tasty, and absolutely delicious. And the crust of the tart was crispy and perfectly complemented the center.

If you ask most Portuguese (which I attempted to do with a very small and non-scientific study) which is the best pastry in Portugal, you’ll consistently get an answer: Pastéis de Belém. And that makes sense, as they have the original recipe of this much-loved treat.

When I got back to my room that night, I investigated and learned that the best Portuguese egg tarts were from Pastéis de Belém. So, not only did the people I met say it, but the general consensus on the internet verified what I learned. I planned to go to Belém during my trip, so I decided I was going to see for myself which was better.

The shop that I stumbled upon in my jetlagged haze was Manteigaria and their pastel de nata was pretty damned incredible. It was lucky for me as it’s a popular place for pastel de nata. You can get them at many pastry shops, which are as common and ubiquitous as Dunkin’ Donuts in the northeast U.S. or Starbucks. But the one I found specialized in this pastry, so you know they got it right.

Lucky for me, I found one right near my apartment. So conveniently placed that it was actually on the way from the subway or the tram from Belém to my apartment. It’s like it was just begging me to do this taste test! Clearly, it was meant to be.

On my last full day in Lisbon and savoring the anticipation, I went to visit Belém. Belém is technically a neighborhood of Lisbon on the far west of the city. However, it has a very different feel from the rest of Lisbon. Two of the incredible and popular sites to see comprise a UNESCO World Heritage Site, Jerónimos Monastery and the Tower of Belém. Being an architecture buff, I knew I was going to go but my independent taste test sealed the deal.

It’s very easy to get to Belém by tram or by bus and takes approximately 30 minutes to get there. When you go, I recommend you get there by 9:30 if possible and go directly to the monastery. Even before it opens, you’ll see a long line of people in the queue to visit it, and it’s worth every minute of the wait. It’s breathtaking. Take your time to savor it and if you do get there early, you’ll appreciate the uncrowded photo ops.

At the monastery, you can get a joint ticket for the National Archaeological Museum, which I highly recommend. It houses a small but impressive display of Roman and Egyptian antiquities. You can also get a ticket to the Tower of Belém and I highly recommend doing so. With this joint ticket, you can bypass the incredibly long line at the tower for your visit!

Make your way to the Monument to the Discoveries and then to the tower. It’s a beautiful structure in its own right, and you get some incredible views of Belém and the Tagus River. There are a few other noteworthy places to visit in Belém if you have the time. Then, head onto the main road past the monastery towards Lisbon to find Pastéis de Belém.

Pastéis de Belém is near where the tram drops off, which makes it very convenient for heading back to Lisbon. You really can’t miss it as there will be a long line spilling from the front of the shop. It does move surprisingly quickly, though.

I had read an insider tip to go inside and get a table and that you’d be served much faster if you do, simply for the price of a tip. However, I personally didn’t find that to be the case. There was a line inside for a table that was a 15-minute wait. When I went back out to the street to stand in line, it moved surprisingly quickly and I waited less time than that.

One nice thing about going inside, though, is that you can watch them make the Portuguese custard tarts. It’s quite an impressive process! And they have tray after tray of them coming out fresh from the oven. No sooner do they come out and cool for a few minutes, then they are swept up by breathlessly anticipating people ready to dive into this precious treat!

I purchased two to go and made my way to the tram to head back to Lisbon.

When I was in Lisbon, I stayed in the Cais do Sodre neighborhood. There is a Manteigaria in the Time Out Center that I passed on the way home. I took a few moments to stand in the window to watch the production of making these tarts, as it’s all glass and can be seen from the street.

I went inside savoring the smell and picked up two warm pastel de nata. Then, I quickly walked the ten minutes back to my apartment, eager to get my taste test underway.

Both places offer packets of cinnamon and powdered sugar to sprinkle over the tarts. The tart from Pastéis de Belém was slightly darker on top, but they otherwise looked identical. I took a moment to savor the smell then took a bite of one, then the other. Not sure which was the winner, I took another bite. And then another.

I’m no professional taster by any means, but the custard tasted the same to me in both tarts. The only difference I could really tell was the pastry shell. They were both nice and crisp, but they were slightly different.

The Winner of the Pastel de Nata vs. Pastéis de Belém Taste Test

In my entirely unprofessional egg custard tart novice opinion, I liked the one from Manteigaria better! Though, even I have to admit, it was a really close call. And I don’t think you can go wrong with either. So, when I hear people say that Pastéis de Belém is the best Portuguese egg custard, I just smile. I won’t disagree as it’s incredible. Though for me, I’m going to Manteigaria when I visit Lisbon again.

I’m no chef, but this pastel de nata recipe looks really good and may be worth a try. What do you think? Let me know if you try it, or if you have a trusted recipe you’d like to share!

If you’d rather take a class, I get that! Here’s a virtual pastel de nata cooking class I found on the Airbnb Experiences that is really well rated. And here’s another virtual class on Udemy with a chef that I saw another blog RAVE about. She had taken a class with him when he had his own pastry shop and highly recommends him.

In fact, I’m tempted to check it out myself. If you do, please send me a message and let me know what you think!

If you’re lucky enough to be in Lisbon, you can take classes live with the experts! Here are two options for classes in Lisbon. The third is a food-tasting tour if you want to simply enjoy them without the work. 🙂