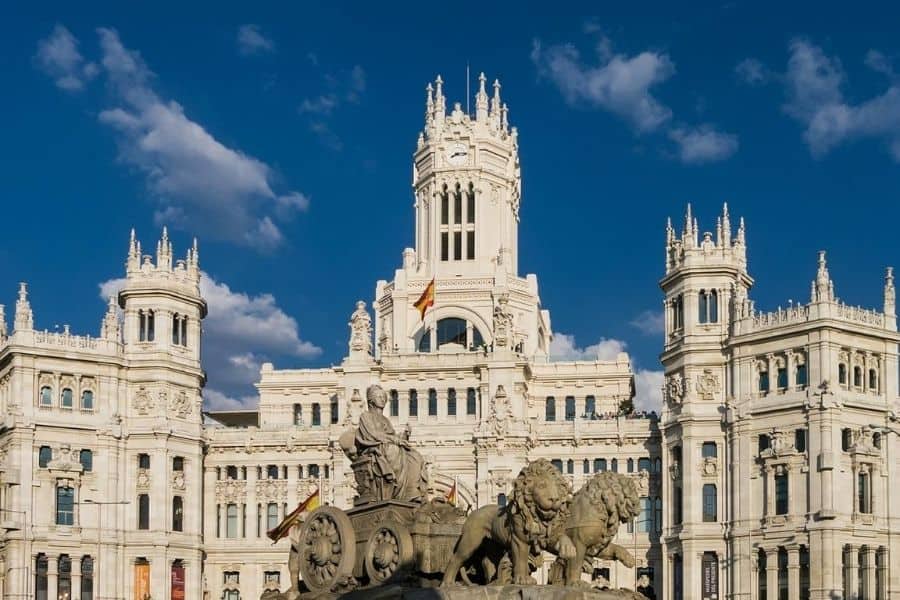 A layover in Madrid is common when you visit Europe, especially from the United States. I find I fly through Paris, London, or Madrid depending on the airline I’m flying and my destination. If you find you have a long connection in Madrid, consider extending it to a day so you can get a sampling of what this incredible city has to offer. One day in Madrid isn’t nearly enough and you’ll want to go back, but here is how to maximize your time to enjoy this amazing city.

Disclaimer: Some links in this article are affiliate links, which means that if you purchase through them, we receive a small commission. This will never cost you extra and I appreciate your support!

One Day in Madrid Itinerary

There’s a lot to pack into a day trip to visit Madrid. What I recommend is a sprinkling that will give you a great taste of the culture, architecture, and history in Madrid. There are so many things to see and do here, and one day in Madrid is hardly enough.

This itinerary assumes you have a full day in Madrid. If you don’t, simply choose what you are most interested in. Depending on your time available, you may need to choose one. If you are able to stay overnight, or have more than one day, check out my 3 days in Madrid post. It includes some great options for hotels and restaurants in the center of the city as well as great itinerary options as well.

To save some time, you can purchase “skip the line” tickets in advance to some of the main attractions.

I would make sure you have at least five or six hours for a connection to go into Madrid. (Unless you want to miss your flight and stay longer!) Trains to the center take around 30 minutes though you may have to wait a few minutes for one. Cabs take around the same time.

Luggage lockers are available in Terminals 1, 2, and 4 at the airport if you are unable to do an overnight. They cost around 4€ (around $4.75 USD) for a day. This is a really handy way to see the city without having to lug around your bag. Even a small backpack will get old if you’re sightseeing. Though, make sure you leave plenty of time to get back to the airport and to retrieve your bag.

One Day in Madrid Itinerary

The first step on your one day in Madrid whirlwind tour is to the Royal Palace. It gets busy, so you’ll want to get there as early as possible. This palace rivals any of the royal palaces in Europe and is known for its grandeur and opulence. It’s a masterpiece and it’s the largest royal palace in all of Europe stretching to 1.45 million square feet (135,000 square meters). There are 3,400 rooms in this palace.

The Royal Palace was built on the site of a 9th-century Moorish Alcázar (a castle or palace), very typical for Spain. However, it’s not the original palace built on this location. The original built in the 16th century actually burned down in 1734 and a new one was built in its place and completed in 1755. It was built to be the “Versailles of Spain,” and I think that goal was achieved.

It is impressive in its own right and it also contains some really amazing things. There is an extensive Royal Armory and paintings from many famous Spanish painters, most notably, Francisco de Goya. And if that’s not enough, the world’s only complete Stradivarius string quartet is also housed here. It’s truly a magnificent place to visit in Madrid and one of the top things to see on one day in Madrid.

The palace is the official residence of the Spanish royal family, however, it’s no longer really used for that purpose. Instead, it’s used more for ceremonial occasions.

This park is simply magnificent. I have a thing about going to visit the notable parks in cities like this, like I did in Seville’s Maria Luisa Park and Bangkok’s Lumphini Park. I may be a city girl but I’m a nature lover as well. Visiting these large parks gives me a great way of balancing both!

Generally called El Retiro, the name of this park in Spanish means “Park of the Pleasant Retreat.” It is huge and truly amazing. El Retiro is packed full of things to see as you stroll around and has a large lace, beautiful gardens, including the gardens in the lovely Crystal Palace glass pavilion. There are also lots of monuments and statues, including an interesting statuary featuring statues of the Spanish kings. There is also an incredible rose garden and the remains of the Buen Retiro Palace that once presided over the area with an interesting art collection inside.

This park not only serves as a place to find solace in the midst of a large city but also holds many events annually. It’s a fun and vibrant place with an air of celebration, even when there isn’t a festival going on.

The Prado Museum is the main national art museum in Spain. The Prado along with the Reina Sofia Museum and the Thyssen-Bornemisza Museum make up the “Golden Triangle of Art” in Madrid.

It has one of the largest art collections in the entire world. It is also known for housing one of the finest collections of European art anywhere as well. So, if you appreciate fine art, this museum is definitely worth your time. It is one of the most popular museums in the world and one of the most visited. If you’re looking for a museum with “street cred,” this is one that is notable.

The building is as impressive as the art it houses. It was built to be a grandiose monumental building and it looks like it could be a palace with its large columns at the entrance and ornate design.

Time for Tapas, a Spanish Tradition

Tapas are not only an important part of Spanish cuisine, but they are also prominent in Spanish culture. These small plates are generally served in the late afternoon and early evening. You’ll often find a glass case with selections or a chalkboard where the available dishes are listed.

They can be cold or hot and range from simple to quite complex. Some typical tapas dishes include chorizo-stuffed dates, garlic shrimp, and jamón y queso. Ham and cheese don’t begin to represent what this must-have dish is! Usually, a local Manchego cheese made of goat’s milk with jamón, a cured ham similar to prosciutto. (Though don’t say I said that as it is SO much better!)

What is great about tapas is not only are they small flavor-packed dishes but since they are small, you share a few with a friend! You get to try a number of different dishes and they are so tasty!

There are tapas bars everywhere in Madrid and you can generally get them in restaurants as well. Sometimes they are shown in a large glass case by the window so you can see what’s available. And as this is also a cultural thing, it’s expected you will move around. Have a glass of Spanish wine or sangria with a tapa or two, then move on to the next place. Doing the “tapa tango” is a great way to really dive into the local culture.

Plaza Mayor is a great place to go for tapas. There are so many great restaurants to choose from and it’s a place you’ll want to see anyways. It’s a large and historical plaza (or square) in the center of the city and worth exploring. It starts getting busier in the late afternoon though you’ll find it’s often at its busiest later at night, at around 9 or 10 p.m. when locals eat dinner. Tapas are intended as a snack of sorts to get you through to dinner. However, if you don’t like eating so late, they are a fine dinner option.

Plaza Mayor is a rectangular square that is closed off between the buildings. There are ten entrances you can enter the square through. There are many restaurants and stores to explore and it’s a fun place to see entertainers, especially at night. Cars aren’t allowed in the area so you can enjoy just strolling around, though as with many squares in Europe, beware of pick-pocketers.

It was once the center of Old Madrid, and remains in the city center. It is quintessential Madrid, so if you have the time, it’s definitely worth seeing.

Plaza Mayor is located in the center of Madrid here.

If your one day in Madrid is 24 hours or so to include an overnight, you’ll definitely want to consider a flamenco. It’s a style of music that was born from southern Spanish folklore. It’s believed to have come from Seville, though it’s very popular throughout the country and Madrid is no different.

Flamenco features music, song, and dance and though it’s enjoyed around the world, it’s known for being uniquely Spanish. It traditionally features a guitarist and a woman wearing a long, colorful, flowing dress. There is generally also a singer (though it may be the guitarist or the dancer). Sometimes you’ll see multiple women, or women and men as well. It’s highly dramatic and emotional and there’s just something magical in this presentation.

It’s usually shown late at night and people watch it after dinner. Shows are often between ten and midnight to accommodate the later dinners here. You’ll find small local places and slightly larger tourist places. And sometimes you’ll even see informal shows on the street, especially in places like Plaza Mayor or another large and famous plaza called Puerta del Sol.

Last Thoughts on One Day in Madrid

I went to Madrid because I wanted to visit Seville, and I was pleasantly surprised by how much I enjoyed it. Madrid is a fun and beautiful city with an air of sophistication and elegance as well as fun. Though one day in Madrid isn’t nearly enough, it’s plenty of time to see the highlights to provide you with plenty of reasons to want to go back.

If you end up with more than one day in Madrid, check out my post on 3 days in Madrid for more ideas.