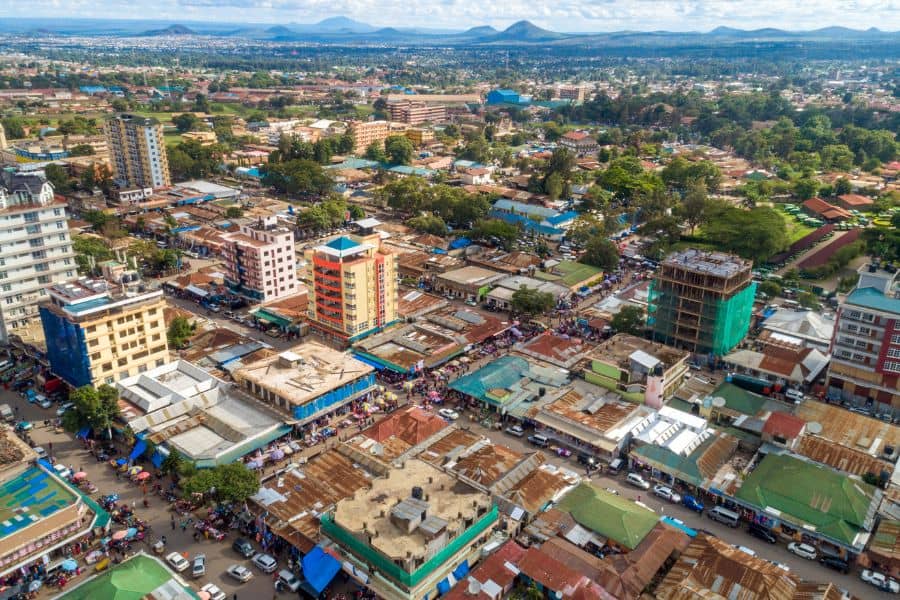 Thinking of living in Arusha?

Whether you’re already in East Africa or coming from another destination, you need to make sure you do your research before moving to Arusha! Life in Arusha is simple as long as you know the best places to live and which visa you need before arriving.

I’ve lived in Arusha twice. The first I moved to Arusha, I was working as a teacher at an international school. A friend helped me get the job ahead of time so I arrived with a visa already. The second time I went, I was volunteering at a school on a volunteer visa while working as a digital nomad at the same time.

Whether you’re going to Arusha to work as a digital nomad or you’re planning to get a job locally, here are all the things you need to know before living in Arusha, Tanzania!

Arusha is one of the top cities for digital nomads in East Africa. While there are fewer ex-pats than in Dar Es Salaam, Arusha is a smaller city where life is more laid back than in the capital of Tanzania.

Arusha has enough activities to keep you occupied but is less expensive and quieter than the capital city. Crime is also far less.

Arusha is also just a few hours away from some of Tanzania’s most famous sites, including Serengeti National Park, Tarangire National Park, and Mount Kilimanjaro to name a few.

Arusha has a young crowd, so most digital nomads will find it easy to make friends. If you have kids, Arusha also has several international schools where they can receive a good education.

Health care is extremely affordable in Arusha even if you need surgery. The international hospitals have the same services as hospitals you’ll find back home.

Some Important Things to Know Before Moving to Arusha:

While most ex-pats live in Arusha as digital nomads, there are also many people living here to work for nonprofits or as volunteers. Teaching jobs in Arusha are also extremely plentiful.

You can work at one of the international schools, but you usually need a teaching degree or a degree in the subject you want to teach. Some of the local schools will hire foreigners as English teachers but then you’re getting paid a local salary which is hard to live on.

Arusha has a higher quality of life than some of the other areas of Tanzania. As an ex-pat, you can easily get an affordable home with most of the same amenities you have in your home country.

The country does have random power and water outages though. Certain amenities, like air conditioning, are extremely expensive and not in most homes.

Overall, yes! I felt very safe living in Arusha. Compared to other East African cities, Arusha is much safer.

Serious crime is rare. Petty theft is common, though. Foreigners are especially targeted since many locals assume you have expensive phones and large amounts of cash on you. Make sure you always keep your bag close to you to stay safe.

Home robberies also happen. It’s recommended that you live in a place with a security guard. Most housing compounds have one, and the rent you pay includes the salary of the guard. Make sure you also have security lights, and you turn them on every day at dusk.

Cost of Living in Arusha

The cost to live in Arusha is much lower than in the US and in much of Europe. Arusha is cheaper than living in Dar Es Salaam, the capital of Tanzania. After spending time in Rwanda and Uganda, I did find Arusha to be more expensive than some other East African cities.

I had a water heater for the shower and a washing machine, so I used more electricity than the average local person. Many homes do not have these two amenities, so I would recommend asking the landlord ahead of time.

Local food is extremely cheap, with the cost of food being between $2-$10 per meal when dining out, depending if you eat local dishes or foreign ones. Foreign food at a hotel restaurant can be as high as $30 though.

Western food will cost you about the same price as if you were home, though. At the supermarket, foods like cheese and cereals are pretty expensive since they are imported.

Transportation is cheap since local taxis and motorbikes only charge you a few bucks to get from one place to another. Motorbike drivers are the easiest way to get around since they are faster than taxis, but they cost a little more.

Best Places to Live in Arusha

Arusha has many places to stay where you’ll find a variety of accommodations. Njiro is one of the best areas for ex-pats since it’s only about 10 minutes from the city center.

Njiro is my top recommendation for digital nomads since it has a great internet connection through Vodacom. There are also many local restaurants and bars you can hang out at. Njiro Complex also has some restaurants, a gym, and clothing shops.

If you’re not working as a digital nomad, I recommend living as close as possible to your workplace or volunteer site. Traffic can be horrible in Arusha in the morning and evening, so this way, you don’t want to waste time in a taxi or in the car.

Ask co-workers or other volunteers ahead of time where they stay so you can get some ideas. You also shouldn’t rent a place without first seeing it in person.

You can book an Airbnb or hotel in Arusha for a few weeks while you scope out the areas and meet with some landlords before deciding.

How to Get Around Arusha

The best way to get around Arusha is by going around on a boda boda (motorbike). It’s quick and cheap. It can be dangerous though, especially at night.

I recommend getting to know a few drivers and using them regularly rather than hopping on a random boda boda. You should also always wear a helmet.

If you aren’t comfortable on a boda, you can use InDriver. The app works the same as Uber, but you have to pay in cash. Definitely use InDriver when going anywhere at night.

They also have local taxis (dala dalas). I rarely used them as I found them super confusing. They don’t have posted routes and don’t drive on a set schedule. The conductor just yells the stops while they go by. If you don’t speak Swahili, you’ll end up getting lost.

When packing for Arusha, bring clothes for all seasons. During the cold season in May through August, you will need pants, scarves, and medium jackets. It also rains quite a bit so make sure to bring a heavy-duty rain jacket.

The hot season is November through February when you’ll be comfortable wearing dresses and lighter clothing.

Arusha is mountainous and sees many months of cold weather and rain. It never gets cold enough to need heavy jackets or boots, though.

Things to Do in Arusha

If you need more things to do in Tanzania, you can also check out the nearby region of Moshi or travel to one of the national parks.

Pros and Cons Living in Arusha

Here are some pros and cons to keep in mind when deciding whether you want to live in Arusha:

Many local coffee shops and hotels have fast Wi-Fi. Wi-Fi networks are always password-protected, so you will need to ask a waiter for a password.

The Vodacom service is good throughout Arusha. You can use your phone as a hotspot or get a Vodacom Mifi or router.

Here are some of the best hotels and coffee shops I found with the fasted Wi-Fi speeds:

The visa you will need will depend on why you’re traveling to Arusha. Most digital nomads get a tourist visa since they are not working locally. You can get a tourist visa on arrival if you’re American. It cost $100 and you can stay in the country for 90 days.

Many digital nomads also do some volunteer work on the side so they get a volunteer visa. You can apply online for this ahead of time or take your passport to immigration and they can change your tourist visa to a volunteer visa.

The volunteer visa is $151 and is valid for 90 days. If you switch it over from a tourist visa, the immigration officer usually adds 90 days to how many days you’ve already been in the country. So, you can basically restart your time over.

Digital nomads cannot be given a work visa. To apply for a work visa, you need to be supported by a Tanzanian company.

Be aware that Tanzanian immigration officials regularly show up at volunteer and work places that are known for working with foreigners. It happened at my volunteer site twice. You’ll get detained and fined if you are volunteering or working on a tourist visa, so don’t risk it!

It can be hard to find a job in Arusha if you don’t already work for a company in your home country that also has branches or a sector in Tanzania. You might have better luck coming to Arusha and networking and then applying for a job a few months later.

Ready to Start Living in Arusha?

Ready to move to Tanzania and start a new life living in Arusha?

It’s one of the best cities for ex-pats and digital nomads in East Africa. In your spare time, there are plenty of national parks to visit and other activities to do around the country.

Don’t be surprised if you plan to come to Arusha for a few months and end up staying forever! With its friendly people and extremely low cost of living, it’s easy to fall in love with Arusha.

Are you planning to spend some time in Arusha as a digital nomad or a volunteer? What are you most looking forward to?

This post was contributed by Natalie Castle. Natalie has been traveling mostly solo for the past 6 years internationally and across the United States. She loves seeing new destinations, especially where she can go to the beach or go for a long hike. She discovered her love for travel writing a few years ago and hopes to encourage other people to begin solo traveling through her writing. When she’s not working, you can find her with a glass of red wine planning her next trip.