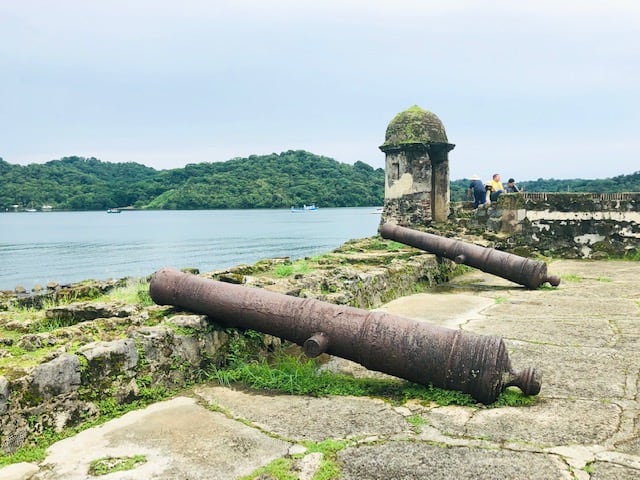 Porto belo, or Portobelo, is a charming small town with a lot of historical significance. The history of this town tells the story of conquistadors and pirates and it’s a must-see when you visit Panama City. It’s hard to believe this small town of around 4,000 people was once a prominent city with such importance to the Spanish in the area.

It was once one of the greatest Spanish fort cities in Central America protected by several forts. Now, it’s a sleepy beach village on the Caribbean coast of Panama with stories to tell. It is only around a 1.5-hour drive from Panama City, making it a great day trip. Here’s all you need to know to go.

Porto Belo, or Portobelo, meaning “beautiful port” in Spanish, was allegedly named by Christopher Colombus. It is a port city that was established during the Spanish colonial period starting in the late 1500s. Porto Belo rose to prominence from the 16th century through the mid-18th century as a center for gold and silver export. It was an important port on the route of Spanish treasure fleets. As a result, the Spanish built fortifications here.

This also made Porto Belo attractive to pirates. It was attacked by William Parker in 1601 and by Captain Henry Morgan (the pirate who sacked the original Panama City, now called Panama Viejo), in 1668. Morgan was successful in his conquest of Portobelo. He raided all of the treasures he found and killed many of the inhabitants. In spite of this, Portobelo was re-established and attacked several subsequent times by pirates and the British.

The Spanish were able to re-capture Portobelo causing major destruction to the British fleet. An interesting fact for English history buffs: Sir Francis Drake died of dysentery at sea near Portobelo and was buried here.

The ruins of the Spanish fortifications along with nearby Fort San Lorenzo were named a UNESCO World Heritage site, “Fortifications of the Caribbean Side of Panama: Portobelo-San Lorenzo.” If you have been reading my blog, you’ll know of my great love of UNESCO World Heritage sites. Since this was so close to where we were staying in Panama City, I couldn’t resist visiting.

Places to Visit in Portobelo

To get to Portobelo, we drove through the city of Colón, a port city located near the Atlantic entrance to the Panama Canal. There are two things I recall about Colón. First, are the very impressive trash heaps found near the sides of the road. Second, are the pimped out old school buses that are used for public transportation throughout Colón. They are painted with bright colors and looks like small murals decorating them. Now I know where old United States’ school buses go to die!

The drive was only around an hour and a half. Part of the ride was on a highway and the rest driving through Colón and the outskirts of the city to Portobelo. You can see a small expat community on the shores driving into the town and Fort Santiago de la Gloria. Continue driving for around ten minutes and you are in the center of the town, near the Royal Customs House of Portobelo and San Lorenzo Fort.

The Customs House Museum was formerly the Royal Customs House of Portobelo. It is a large and rectangular-shaped building in the center of town near Portobelo Park. The Customs House was built in the mid-1600s in the Renaissance style with rounded arches and columns. It is under renovation and looks like it probably has been for quite a while. During the height of Portobelo, almost a third of the world’s gold and silver passed through here.

The museum comprises only a small part of the building. There is no real lobby when you walk in, and a man who appeared to be doing renovations took our fee for entry. There is one room with artifacts from the period when it was used in the 1600s through the 1800s. It includes a cannon, some cannonballs, coins, articles, and some other random things from that time. It’s not much to see, but it’s worth a few minutes.

There is also a short movie about the history of the area that is worth the ten minutes or so that it runs.

The Royal Customs House of Portobelo is located at Calle Genea, Portobelo, Panama. It is open daily from 8 to 4 and entrance costs $5 USD.

Right next door to the Customs House is San Jeronimo Fort. It is the best-preserved fort in the area and was the largest fort built to protect the area. San Jeronimo was built in the mid-1600s and it was attacked and destroyed by the British. It was rebuilt into a more streamlined structure that still stands today.

You can see the outline of some rooms including a kitchen/dining room, a room for soldiers to sleep, and a large room where slaves were held. There is also an area leading beneath the fort where the jail was held. It did take on water frequently during times of flooding so it was especially not a fun place to be. The rest of the fort was mostly open and there are areas with battlements overlooking the water filled with cannons.

There are some pretty views of the water and the town along the shore as well as some monstrously impressive-looking turkey vultures that watched our every move. I’ll admit it, it was a bit unnerving.

There is no entrance fee for San Jeronimo Fort or the other forts in Portobelo.

After you visit the Customs House and San Jeronimo fort, take a few minutes to walk through the town of Portobelo. It’s small and there isn’t much to see, but it’s still worth looking at. We saw a couple of homes decorated with some beautiful small murals and one had a large chicken wire cage on the back with a monkey. We also saw some bird cages as well.

There is a large white building with a purple trim that you can’t miss. This is San Felipe Church and Convent (Iglesia de San Felipe). The church itself wouldn’t be memorable except for the fun shade of purple outside except for its content: the Black Jesus.

Christo Negro, also called “el Negro,” “el Negrito,” and “el Christo” is a life-sized wooden statue of Christ that was found on the sores on the town’s harbor. It is venerated throughout the year and is the focus of celebration on October 21st every year for the Festival of the Black Christ. There is a pilgrimage through many parts of Panama where people don purple robes and walk more than 50 miles to Portobelo to visit Christo Negro, often crawling the last mile on their hands and knees for a blessing.

Several miracles have been attributed to this statue as well. Criminals also make this pilgrimage to atone for their sins, so it is often known as the “patron saint of criminals.”

This fort was built in around 1600 but destroyed by Henry Morgan. It was rebuilt but destroyed again by the British in the mid-1600s. It was never rebuilt again and was left in ruins and abandoned.

When you drive into Portobelo it is the first fort you will see on the entrance into the town. However, I’d recommend seeing it last after you see the rest of the town on your way out.

Another place to visit if you have the time is Playa Blanca. It’s a beautiful white-sand beach located around 20 minutes from Portobelo. It has some great reefs for snorkeling.

Or, head a little further to Isla Grande, an island reachable only by boat. It is a short ride and offers a beautiful beach surrounded by lush green vegetation as well as some great surfing spots.

There are a few transportation options to get to Portobelo from Panama City, depending on how much you want to spend and how much time you have. You can, of course, choose to rent a car and drive there yourself. The drive itself wasn’t difficult, though driving in Panama City can be a bit.. exciting.

The cheapest option is by bus from the Panama City Albrooke terminal. Take the Colon Express (45 minutes and around $3.50 USD) to Sabanitas, and get off at the Rey Supermarket. Then take a bus to Portobelo in front of the supermarket (1 hour and around $1.50 USD).

You can also take a tour or hire a driver. There are some great tours to Portobelo available on Viator. You will need to negotiate the cost of a driver and guide. We paid $70 for the guide we got. He wasn’t the best guide and was a downright scary driver (including a minor fender bender at no extra charge)! However, the cost was less than we would do on a tour and it saved us time.

Porto belo is a great trip when you visit the Panama City area and one I’d recommend to get a better understanding of the history of the area. It’s an easy day trip filled with tales of pirates and quests for gold.