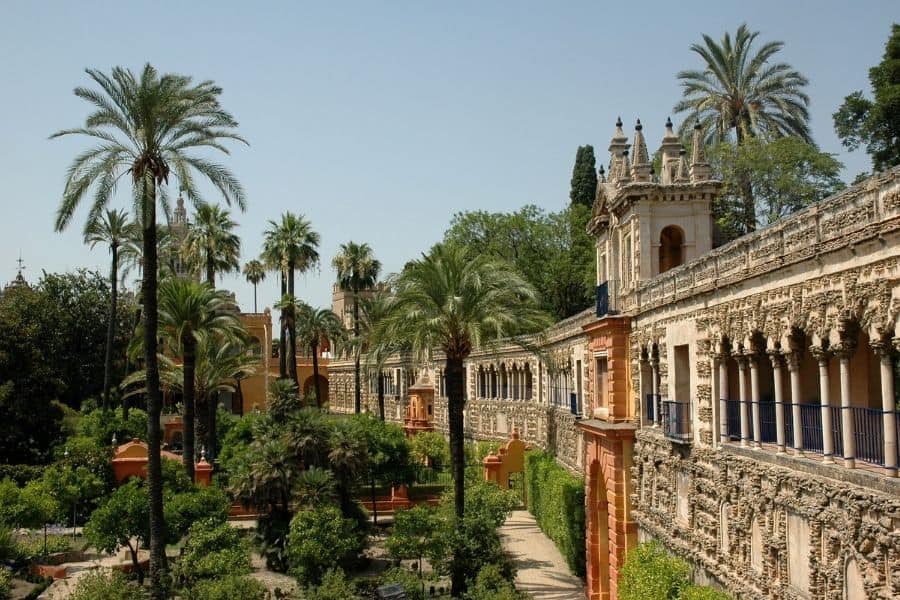 Spain is a popular tourist destination for its natural beauty, rich history, and culture. People are swept away by the allure of the stunningly-beautiful historic city centers and impressive architectural monuments hailing to another time. There is a charming sophistication in the cities of Spain that draw tourists every year. Here are some of the most beautiful cities in Spain that you won’t want to miss.

Disclaimer: Some links in this article are affiliate links, which means that if you purchase through them, I receive a small commission. This will never cost you extra, and I really appreciate your support!

Madrid is the capital city of Spain and the largest in the country. It’s also the second-largest city in Europe. It hails back to prehistoric times and there is evidence of Visigoth, Germanic tribes, having been there.

It’s a very modern city that has worked to preserve its historic neighborhoods and areas. Worth visiting are the famous squares of Plaza del Sol and Plaza Mayor. They are great for food, street entertainment, and people-watching. Other places worth visiting include the stunningly grand and opulent Royal Palace, which rivals many of the others in Europe. Stroll around Retiro Park, with its magnificent rose garden and the Crystal Palace, a glass pavilion filled with indigenous plants and flowers from the region. The park also has an interesting statuary worth seeing.

You May Also Like 3 Days in Madrid: Top Things to See and Do

Though Madrid is a large city, the historic center is very walkable and the city itself has great public transportation. The airport is massive and a popular European airport for connections, making Madrid a great place for a layover to see the sights.

Just a short train ride from Madrid is the beautiful historic city of Toledo. The old town is a UNESCO World Heritage Site worthy of visiting.

Perched on one of the highest points in Toledo is the impressive El Alcázar. This old fortress dates back to Roman times though it was later rebuilt and expanded. The building is stunning and some of the most incredible city views can be seen from here. It also houses the Military Museum with history about the Spanish army.

The Cathedral is a huge Gothic structure, and one of the most important Christian landmarks in the country. It was built in the 13th century next to the Jewish quarter and features a soaring tower and stained glass from back in the 13th century.

The old town is packed full of many treasures with seeing and even wandering through the beautiful cobblestoned streets is a great way to spend a day.

Seville is what you dream about when you close your eyes and think of Spain. It has it all—stunning architecture, rich Andalusian Spanish culture, royal history, and some really beautiful areas to see.

Another city founded during Roman times in the 7th century, Seville has seen its share of action. It fell under Moorish control for a time before the Christians overthrew the Muslims. Then it entered a time of prominence and it was a wealthy economic center during the Golden Age. Famed voyages embarked from the port city of Seville including Ferdinand Magellan, Amerigo Vespucci, and Christopher Columbus. Seville was the gateway to the New World and was the first port the explorers entered with treasures, spices, and other goods.

In fact, Seville has three UNESCO World Heritage sites in the historic old city representing the Golden Age. The Seville Cathedral with the Giralda minaret tower over the city paying homage to the city’s blended history. It is also the largest Gothic building in all of Europe.

The Royal Alcázars of Seville is part of the UNESCO site, a royal palace and stunning structure with Moorish and Gothic architectural styles. The General Archive of the Indies has valuable documents from the colonization period in the New World.

Seville is alive with the rich Andalusian culture so enjoy tapas, a flamenco, or just people-watch in Plaza de España. It’s easy to see why this city is always on the list of the most beautiful cities in Spain.

Nestled between Madrid and Seville is this true marvel of a city. If you love architecture, you may just fall in love with Córdoba.

This former Roman colony grew to prominence during the 9th and 10th centuries. Córdoba became the Islamic capital and largest city in Western Europe. It was known as a world-leading center for education and a place of talented artisans skills in silver, tile, leather, and textiles. Córdoba was also a place where Muslims, Jews, and Christians peacefully coexisted for a time.

The historic center of Córdoba including the Jewish Quarter is now a listed UNESCO World Heritage Site. Wander around this neighborhood, a lovely maze of streets and courtyards. Visit the Mosque-Cathedral of Córdoba, a stunning sight with its Moorish arches and columns made of red and white stone. It blends Christian and Islamic architecture with Roman influences in a beautiful way.

See the medieval palace and fortress, the Alcázar of Córdoba. This former residence of the Spanish kings was where Queen Isabella and King Ferdinand stayed when they sent Christopher Columbus to explore the “New World.” The Hall of Mosaics has some of the most incredibly stunning tile work in the world and the gardens are simply magnificent.

Barcelona is an enchanting port city in northeastern Spain with a 2000-plus-year history dating back to Roman times. The largest city in Catalonia has a large and thriving medieval Gothic Quarter overflowing with history. It also has some of the city’s most stunning architecture including the Barcelona Cathedral, a gorgeous Gothic cathedral built between the 13th and 15th centuries.

Though Barcelona has some gorgeous historic areas, it’s known for “Catalan Modernism” movement. Famed architect, Anton Gaudi, designed 7 structures in Barcelona, and they are all a UNESCO World Heritage Site. His most famous, Sagrada Famlia, is an interesting and unique basilica that remains unfinished to this day. Perhaps one of his most interesting places is Park Güell, and community development turned public park.

You May Also Like What to Do on a Barcelona Weekend

Barcelona is a city rich with history and culture. It’s a great place to take in a flamenco show, a rich, passionate, cultural Spanish experience. Enjoy tapas and learn the importance of the siesta. Wander La Rambla, the pedestrian street loaded with shops and restaurants or stroll Barceloneta Beach. There’s no shortage of fun things to do in Barcelona.

The highlight of Montserrat to visit to Santa Maria de Montserrat. This Benedictine abbey is located in the strikingly jagged Montserrat Mountains. This abbey was originally built in the 11th century, offers stunning views of the countryside surrounding it.

For some, this is a pilgrimage to see the Virgin of Montserrat. The impressively beautiful basilica houses this Black Madonna who is believed to have healing powers. For others, it’s a stunning area in these unique mountains and a great place for hiking, wandering, and enjoying the views. You can also catch the famed Montserrat Boys’ Choir for a short performance.

You May Also Like Best Day Trip from Barcelona to Montserrat

Part of the fun is getting there and you can take a funicular to the abbey and take them to climb to higher vantage points in the mountain. Regardless of what takes people to Montserrat, it’s a lovely day and a very popular day trip from Barcelona.

Granada is easily one of the most beautiful cities in all of Spain. This city at the foothills of the Sierra Nevada mountains in Andalusia, southern Spain, is pure magic with its many architectural and natural treasures.

The impressive and sprawling fortress of La Alhambra offers up royal palaces with lovely gardens, patios, and pools dating back to the 13th and 14th centuries. Alhambra Palace with its eastern-style architecture is known as one of the most beautiful in the world.

You’ll see a tapestry of influences from the Catholic, Jewish, and Muslim history reflected in the architecture. The Alhambra citadel, Generalife Gardens, and Albayzín neighborhood make up a UNESCO World Heritage Site, so you know they are special and worth visiting.

Once you explore the city, take a trip out to the Sierra Nevada Mountains or go to the beach in Costa Tropical. There are some magnificent beaches in southern Spain worth visiting. There’s a lot to see and do in and around Granada. While it’s a popular city, you’ll find it’s a bit less traveled than some of the other cities in Spain.

Why You Should Visit the Most Beautiful Cities in Spain

Spain is one of the top countries on any visit to Europe and with good reason—it’s filled with a lot of natural and man-made beauty, art, history, and rich culture. There are so many places to visit in this amazing country and honestly, you really can’t go wrong anywhere! These cities are some of the top draws and the most beautiful cities in Spain which are popular with tourists for a reason! They are amazing and worth adding to your Spain adventure list.