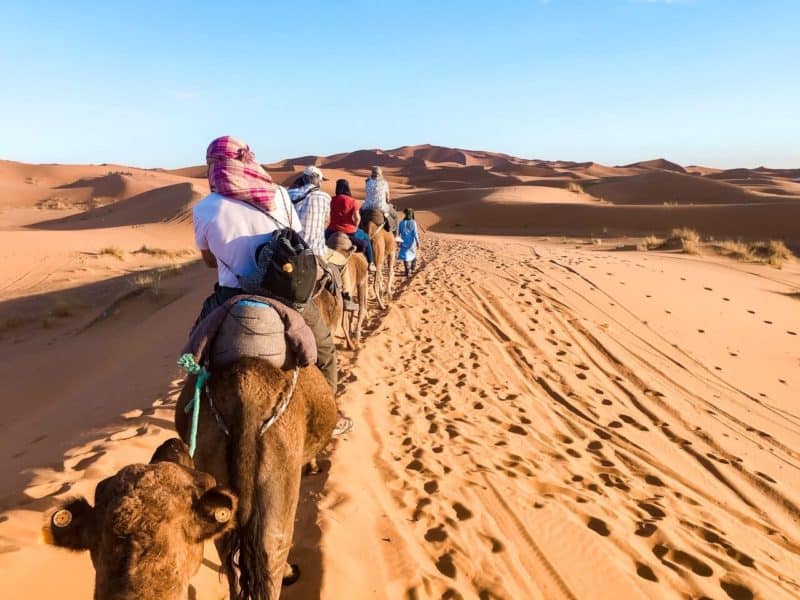 Morocco is such an incredible country filled with diversity, beauty, and charm. It has been on my wish list forever and was a dream for many years to visit. It has something for everyone—rich history, stunning architecture, old imperial cities, impressive mountain ranges, majestic sand dunes, and tantalizing cuisine. Here are my top ten reasons for visiting Morocco.

This post may contain affiliate links, which means I’ll receive a commission if you purchase through my links at no extra cost to you. Please read full disclosure for more information.

There is something so breathtaking about seeing the Sahara sand dunes. They seem to rise up from the ground high enough to envelop the surrounding areas. They go for as far as the eye can see and turn the most incredible palette of colors with the shifting sun.

I never knew sand could be so beautiful!

One of the most popular ways to see the sand dunes is by camel or dromedary. I have been horseback riding but riding a camel is really nothing like that. They are really jerky on the way up and down, and they walk with a strangely interesting gait that takes some getting used to. And somehow, they manage to find purchase in the quickly shifting sands.

Watching the sunset over the Sahara Desert was one of the most breathtaking experiences of my life and one I highly recommend. If you’re seeking reasons for visiting Morocco, this is definitely one to consider. Merzouga is a great place to visit to see the Sahara sands of Morocco.

With not just one but four mountain ranges to choose from, Morocco is a hiker’s paradise and a big reason for visiting Morocco. One of the most popular is the High Atlas Mountains, stretching across the central part of the country.

This area has some of the most popular tourist destinations, including Marrakech, Ait Ben-Haddou, and Todra Gorge. The range also boasts the tallest peak in Morocco as well as all of northern Africa.

There are many things to do in the High Atlas Mountains, including taking a hot air balloon ride from Marrakech, visiting some of the small Berber mountain villages, and checking out some of the Argan oil co-ops.

It’s hard to believe as it’s only a few hours’ drive from the sand dunes of the Sahara Desert, but you can also go skiing during the winter.

There are many hiking trails through the mountains. Some of the most popular hiking treks go to the Ouzoud waterfalls, the tallest waterfall in northern Africa. And if you’re lucky, you might see some macaque monkeys.

Through Morocco, you will find exquisite architecture reflecting the cultural diversity of the country. Palaces, mosques with a square minarets, riads, and even homes reflect the diversity of the people living there as well as the countries that have influenced it.

Many of the buildings feature decorative carvings made of wood or plaster and traditional tilework called zellige.

Some of the buildings that stand out in my mind are the Hassan II Mosque and Mahkama du Pacha in Casablanca, the Fortress of Essaouira, Bahia Palace and the Saadian Tombs in Marrakech, and the University of Karueein in Fes.

There are many more examples of impressive architecture throughout the country, making this a great reason for visiting Morocco. I love architecture, and often my pictures look like a grouping of buildings as I tend to focus on this aspect of the places I visit.

Morocco stands out as a top country for its amazingly beautiful architecture.

Cultural influences from Arabs and Berbers

The fabric of Morocco is made of many diverse people and is strongly influenced by the Arabs and Berbers. Both contributed to the culture and traditions, making Morocco such an interesting and special country.

You’ll also see influences from Europe, including the French, Portuguese, and Spanish. There was also a significant Jewish population until the mid-20th century, interesting in a predominantly Islamic country.

This mix of cultures makes for a diverse population. Morocco is surprisingly progressive as well, having a tradition of acceptance that has increased in recent years when the current king began his reign.

In fact, it is known for being one of the most tolerant of the Arab nations. The country is stable and relatively safe overall. Moroccans are known for being warm and friendly, making it an easy place to visit.

Another good reason for visiting Morocco is if you’re looking to know more about Muslim countries in a place that is warm and welcoming to visitors.

Tagine. Couscous. Pastilla. Oh my. Morocco seriously serves up a foodie delight, and there are so many options to choose from. Visiting Morocco is a culinary adventure. The spices will make your mouth water as you think of how flavorful the dishes are. The slow-cooked goodness served to the table is sure to offer something for everyone.

Though dishes are often meat-heavy, fish is commonly found, especially in coastal areas. And, of course, vegetables are plentiful, and it’s easy to find tagines and couscous dishes overflowing with vegetables.

There are also some traditional dishes like harira (tomato soup with lentils, chickpeas, spices, and rice or pasta) and Berber omelets (egg, tomato, onion, and herbs cooked in a clay pot). for something a little different and tasty. And Moroccan pastries are something to be included in song.

You May Also Like 20 Best Tips for Visiting Morocco

Though I’ll admit to being a bit tagined-out by the middle of the trip, I managed to rally on my last day with a beef and fruit tagine that knocked my socks off.

And not to forget the mint tea, or “Moroccan whiskey,” as it’s sometimes called. In a country where limited alcohol is drunk, mint tea is an addictive substitute. It’s fun to watch them pour it from an impressively high angle.

Love Morocco Through the Medinas

The medinas are literally the historic heart of the cities. These old-town centers are a spectacular maze to explore and get lost in.

Part residential area and part shopping and market center, they are the lifeblood of every city and a great way to really get to know Morocco. Visiting Morocco and the medinas provides a really good idea of what the country is all about.

You’ll find the souks, or traditional marketplaces, in the medina areas. You can get everything and anything there. The bright colors, the scent of herbs and spices, the interesting and intricate pottery, and woven items.

Be prepared to bargain and haggle until you settle on a price both are pleased with. I’m not much for shopping, but I sure do like a challenge. There is something that is just fun and appealing to me about bargaining. And Moroccans love to negotiate!

The medinas also have homes where families have lived for centuries. They look impossibly close to each other and are often crumbling. See men and women working in their shops and kids running through the narrow streets and pathways.

Be prepared to be overwhelmed while you are wowed. They are in the cities including Marrakech, Fes, Essaouira, and Casablanca, among others.

The pottery in Morocco is amazingly beautiful, with colorful and intricate designs. It’s grand and ornate. There are traditional pieces that you can find on sale in every market, like plates, cups, and platters.

There is, of course, a range in quality, so be sure to look pieces over well. I was able to go to a remarkable co-op in Fes that did all the pottery by hand, including throwing the pieces and painting them. They also cut mosaic tiles by hand and lay them in the same way.

The pottery of Morocco is gorgeous. You will find it everywhere, so admire it—the craftsmanship, the detail, the colors.

I’m a sucker for UNESCO World Heritage Sites, and Morocco has some amazing and diverse ones. The stunning oceanside fortress of Essaouira was one of my favorite cities to visit. I loved its white-washed, winding, narrow walkways, striking bright blue fishing boats, and brightly colored doorways.

Volubilis, the Roman ruin in Morocco, is a testament to the might and expanse of the Roman Empire. This wealthy city boasts some impressive traditional Roman architecture, including a triumphal arch, a basilica, and a large temple.

Impressive mosaics covered the floors of the wealthiest homeowners. Much of the city is still unexcavated, leaving the grandness to the imagination, but it’s amazing to be able to walk amongst the buildings and touch the walls that stood many centuries ago during Roman times.

Ait Ben-Haddou features a group of adobe buildings surrounded by high walls called a ksar. There are merchant homes that were once protected by the walls when this city was on the caravan route between the Sahara Desert and Marrakech.

You are able to walk through this ancient ksar and climb to the top of the hill it is on for amazing views of the surrounding area.

The Call to Prayer

I have never been to a Muslim country before, so I wasn’t sure what to make of the call to prayer at first. After all, I hate to admit this, but the only time I had ever heard it before was in the movies. And generally, those movies didn’t shine the location in a positive light.

There is something so amazing about the dedication of the Muslim faithful, praying five times a day starting before sunrise at 5 am and ending well after sunset. And there is something beautiful about the melodic nature of the call, seeking the faithful to gather in the mosque.

The colors of Morocco are bright and bold, and they are proudly displayed everywhere. In the markets, you’ll see brightly-colored powders, tapestries, clothing, and pottery. Throughout the cities, you will see splashes of color on doorways and accents all over.

Colombia boasts some brilliant colors, particularly in the smaller Spanish Colonial towns. Magical gems like Guatapé and Salento, and even the historic old town in the city of Cartagena.

But nowhere rivals the cities of a color, like Marrakesh, the red city, Chefchaouen, the blue city, and Casablanca, the white city. And the splashes of bold, bright colors throughout the country. It’s magnificent.